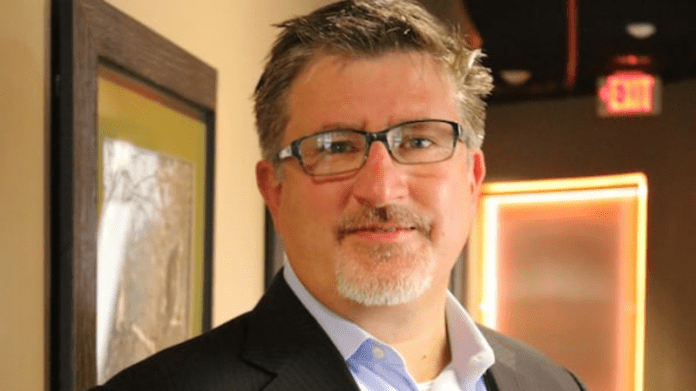 A Schaumburg, Illinois tech firm fired its president/CEO Friday, January 8, 2021, — the same day the U.S. Department of Justice released details of the charges filed in federal court against him and a dozen others for being part of the mob that stormed the U.S. Capitol Wednesday.

The charges were announced by the U.S. Department of Justice a day after U.S. Capitol Police reported his arrest for unlawful entry.

The federal complaint says Rukstales was at the front of a crowd near the door to the House atrium and refused orders by Capitol police officers to leave.

Rukstales had been placed on a leave of absence by Cogensia on Thursday, before the company’s board of directors decided to terminate him. Joel Schiltz, Cogensia’s senior vice president and chief operating officer, was named acting CEO.

“This decision was made because Rukstales’ actions were inconsistent with the core values of Cogensia,” Schiltz said in a statement Friday. “Cogensia condemns what occurred at the U.S. Capitol on Wednesday, and we intend to continue to embrace the values of integrity, diversity, and transparency in our business operations, and expect all employees to embrace those values as well.”

Rukstales, 52, of Inverness, was among the dozens arrested and charged in the aftermath of the riots Wednesday in Washington. After his arrest, Rukstales released a statement calling it “the single worst personal decision of my life.”

“In a moment of extremely poor judgment following the Jan. 6 rally in Washington, I followed hundreds of others through an open set of doors to the Capitol building to see what was taking place inside,” Rukstales wrote Thursday. “My decision to enter the Capitol was wrong, and I am deeply regretful to have done so. Without qualification and as a peaceful and law-abiding citizen, I condemn the violence and destruction that took place in Washington.

“I offer my sincere apologies for my indiscretion, and I deeply regret that my actions have brought embarrassment to my family, colleagues, friends, and fellow countrymen,” he continued. “I have no excuse for my actions and wish that I could take them back.”

Federal campaign finance records show Rukstales has been a big donor to President Donald Trump and Republican causes, having donated $25,000 to various committees in 2019 and 2020.

Another man from the suburbs was also arrested in connection to the events in Washington.

David Fitzgerald, 48, a tattoo artist from Roselle, was charged with an unlawful entry on public property and a curfew violation — both misdemeanors. He was among a group of protesters arrested about 7:15 p.m. Wednesday after Washington Mayor Muriel Bowser’s curfew had gone into effect at 6 p.m.

According to court documents filed by prosecutors, Metropolitan Police Department officers issued at least three warnings to disperse to those gathered near the Peace Circle monument northwest of the Capitol. People were stopped and placed under arrest when they didn’t obey the warnings, authorities said.

Fitzgerald pleaded not guilty in a court appearance Thursday.

Reached at his home Friday afternoon by ABC 7 Chicago, Fitzgerald condemned the violence. But he said he never went inside the Capitol building, and from where he was on the Capitol grounds, everything was “totally peaceful.”

“When we went to D.C. we had a plan,” Fitzgerald told ABC 7. “We were gonna feed the homeless, clean up the parks, and we were gonna protect the people. And then we were gonna watch what was going to happen with the election.

“And what happened is so much crazier than anything you know.”

In a video posted by Fitzgerald to his Facebook page just before his arrest, he and others ask officers clad in riot gear where they could exit a barricaded area. In comments to friends who were watching live, Fitzgerald writes, “I’m under arrest,” and “Tell my wife.”

The video is one of several social media posts by Fitzgerald after his arrival to Washington, including scenes from the Trump rally Wednesday morning and a visit to the Lincoln Memorial the night before. One commenter tells him to be careful; that there are hundreds of protesters getting inside the Capitol. In a reply to another commenter, he said the scene is “chaos,” but that “I’m safe.”

Court records show Fitzgerald was ordered to stay out of Washington until his next court date in June.