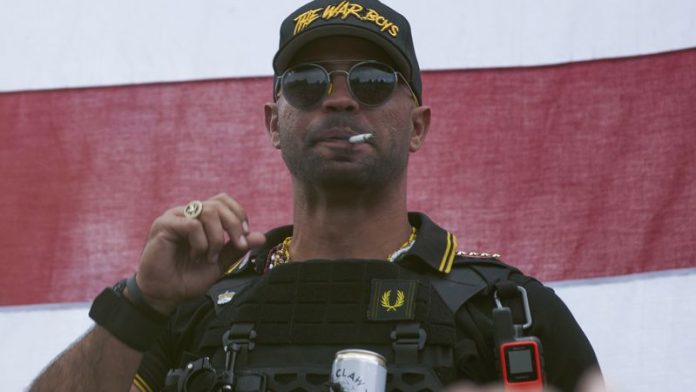 Enrique Tarrio, the Proud Boy leader who toured the White House last month and was arrested Tuesday in Washington on vandalism and weapons charges, appears to have ties to a Republican mega-donor as well as the owner of a landmark Washington nightspot popular among conservatives. Tarrio, the neofascist group’s chairman and a convicted felon, also failed to file federally mandated financial disclosures related to his brief, unsuccessful congressional campaign last year, and appears connected to a number of businesses, most of them defunct and none of them apparently profitable.

Despite the Harrington Hotel’s efforts to distance itself from the Proud Boys, who in November brawled on the streets of the nation’s capital with counter-protesters and police, the owner of Harry’s, the downtown landmark bar, was one of the first donors to Tarrio’s ill-fated 2020 congressional campaign.

“In a city known for its high-powered, wood-paneled eateries, Harry’s can seem out of place. Housed on the ground floor of the Hotel Harrington, Washington’s self-proclaimed “tourist hotel” where rooms begin at $95 per night, Harry’s is a rare dive bar in the middle of the city’s expense account district, an oasis of $6 Bud Lights in an ocean of $18 Manhattans. Hundreds of police patches hang on the walls of the narrow bar, which is filled with old-school red vinyl stools and faux-Tiffany lamps, while black-and-white tiled floors gives the place a sort of fun-house feel. The food is cheap, and the atmosphere is casual. “Don’t eat the fish,” counsels a top review on Yelp.

But what for years was a low-key haunt for off-duty police officers and busloads of tourist groups has, during the Donald Trump presidency, attracted a brand-new clientele. In the past four years, Harry’s has become the de-facto D.C. headquarters of the Proud Boys, the all-male extremist group known for its members’ thinly veiled racism, penchant for street violence and unwavering support for the president. When they’re in town for rallies or protests, the Proud Boys and other rank-and-file MAGA loyalists toast Trump and down beers among the vinyl stools here, or on the patio, under the eerie technicolor glow cast by the pub’s neon signs.”

On election night last November, a group of Proud Boys, Tarrio among them, were reportedly assaulted while leaving a watch party at Harry’s. Right-wing provocateur Bevelyn Beatty was stabbed in the back in the attack. The next month, Harry’s was ground zero for more stabbings after the pro-Trump Million MAGA March on Dec. 12, resulting in four hospitalizations, according to district police.

Anticipating further violence ahead of this Wednesday’s right-wing rally against the election results — which led to an unprecedented uprising and assault on the U.S. Capitol — the Harrington Hotel shut its doors, and in doing so, shut Harry’s as well.

“While we cannot control what happens outside of the hotel, we are taking additional steps to protect the safety of our visitors, guests, and employees,” the century-old hotel said in a statement, without offering further reason or specifying the widely suspected true target: the attached street-level bar.

While the bar’s longstanding association with the Proud Boys is well known, the relationship between the bar’s owner, John Boyle, and the white nationalist group’s chairman has not attracted attention.

In February, one month after Tarrio kicked off his bid to represent Florida’s 27th congressional district with a 250-plus person soiree at the Trump National Doral club near Miami, Boyle, a D.C. resident, gave the Tarrio campaign $250, according to filings with the Federal Election Commission. Records show that it was the third donation Tarrio collected in his brief run — and also the first and so far only federal campaign contribution Boyle has ever made.

“I need to come up with $10,440 to be put on the ballot. There’s 130 chapters in the presidents chat … if a fraction of those will give $200 by April 18th we will have a Perry in Congress,” Tarrio wrote, referencing the brand of polo shirt often sported by members. “There is no bigger ‘fuck you’ to the establishment than getting one of our own elected into high office,” he added, then pointed his colleagues to a donation link created “just for us.”

“Share it only on Proud Boys chats,” the chairman told his charges. “I need to fill that bar.”

Tarrio ultimately failed to make the ballot, but because his campaign raised and spent more than $5,000, he was required by law to file a financial disclosure form with the House of Representatives. Tarrio never submitted the form, which would have revealed information on his assets, debts and possible business ties. A filing with the Florida secretary of state’s office shows that Tarrio is the registered agent for a company called WARBOYS LLC, which lists as managers fellow Proud Boys Joe Biggs and Ethan Nordean.

Further, Tarrio’s given name, Henry Tarrio Jr., is connected in filings with the inactive businesses SPIE SECURITY, PROUD BOYS and FUND THE WEST. (The Proud Boys self-identify as “Western chauvinists.”) According to FEC records, a Florida company called Spie Surveillance & Automation received $215 for a security system in 2019 from New Jersey Republican Hirsh Singh’s Senate campaign. (Singh unsuccessfully challenged his primary defeat in court, and in November turned his sights on the governor’s mansion.) While Tarrio’s LinkedIn profile lists him as having been CEO of Spie Surveillance & Automation Technologies since 2006 — a Miami company that provides “the ultimate experience in residential and commercial security solutions,” according to its website — no business is registered under that name in Florida.

In 2019, Tarrio told the Daily Beast that he was the “business owner” of a website called 1776 Shop, but the company declined to confirm that claim in an email. The outlet noted that the email came under the name “fundthewest,” a name shared by the now-defunct business Tarrio had registered the previous October. Florida state records obtained by Salon show that Tarrio’s mother, Zuny Duarte, a Cuban immigrant, owns the fictitious business name 1776 Merchandise, which runs the 1776 Shop website. (It appears that Tarrio, 36, legally resides with his mother at that company’s Miami address.)

Tarrio’s name is also associated with Lunar GPS Solutions LLC, which cites the same address as Spie but was run by Tarrio’s younger sister as well as another relative in Sugar Land, Texas. In 2016, Tarrio launched a Kickstarter for a proposed joint venture between Lunar GPS and his company, Spie, for a pet surveillance system called the Halo Collar. The product was equipped with a tracking device and a camera designed to stream a first-person view of what the wearer — presumably a domestic animal — was seeing, and allowed two-way remote communication between pet and owner.

The Kickstarter video shows Tarrio demonstrating the collar on a French bulldog, but his name was not associated with the campaign itself, which listed only Ernesto Maldonado, Tarrio’s Sugar Land relative. The campaign was canceled after 26 backers pledged a combined $4,330 — $75,670 short of its $80,000 goal.

Tarrio still has not paid the $1.2 million in restitution he owes to Abbott Labs for stealing and reselling diabetes test strips, a crime for which he was sentenced to 16 months in federal prison in 2014. The conviction raises new questions about how Tarrio was cleared for a White House tour last month, when he posted photos from inside the gates ahead of a violent pro-Trump rally, claiming he had received a “last-minute invite to an undisclosed location.”

The White House later said that Tarrio was not personally invited, but had instead taken part in a public tour. A routine White House background check, however, would have noted the felony conviction — which would have disqualified any visitor for such a tour unless an administration official personally intervened, a former senior White House official previously told Salon.

In a further wrinkle, Tarrio was joined at the White House by other members of his group Latinos for Trump, including Bianca Garcia, the president, and her son, Armani Garcia, a former intern for Rep. Jody Hice, R-Ga. The plane that flew the group, including Tarrio, to Washington is owned by Texas Republican mega-donor Steven Webster, through Webster Air. During the 2020 election cycle, Webster contributed nearly $400,000 to GOP campaigns and committees, including tens of thousands of dollars to committees supporting President Trump.

Webster, today co-CEO and managing partner at Avista Capital, a private equity firm that specializes in health care, initially made his fortune in offshore drilling. His former company, R&B Falcon, was the first owner of Deepwater Horizon, the infamous offshore oil rig that exploded in the Gulf of Mexico in 2010, creating the worst environmental disaster in U.S. history. The week after Webster’s jet flew Latinos for Trump to D.C., Avista announced that it was acquiring the dental supplier Solmetex, whose main business is in amalgam separators — mercury filtration devices which are among the few products to have escaped the ruthless EPA regulatory rollbacks unleashed by the Trump administration: Formerly on the chopping block, amalgam separators are, as of July 14, 2020, mandatory for all dental offices in the U.S.