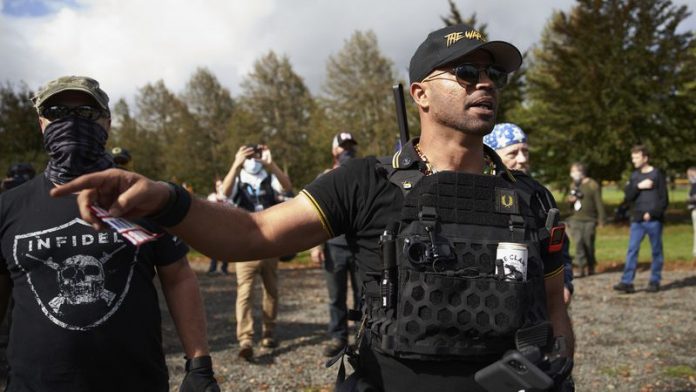 The leader of the Proud Boys, the far-right group that has vocally supported President Trump’s efforts to overturn the election results, was arrested on Monday on charges of destruction of property after he arrived in Washington to protest the congressional certification of the election later this week, according to a person familiar with the matter.

Enrique Tarrio, the chairman of the Proud Boys, was arrested by Metropolitan Police on suspicion of burning a Black Lives Matter banner torn from a historic Black church in Washington during protests last month that led to several violent clashes, including stabbings, around the city.

The arrest also pits the Justice Department against some of Trump’s most ardent supporters; the U.S. attorney’s office in Washington acts as the main prosecutor’s office for the District of Columbia.

Trump exhorted his supporters to descend on Washington to express their dismay with the certification of the election for President-elect Joseph R. Biden Jr. On New Year’s Day, he promoted what he described as “the BIG Protest Rally” in Washington. 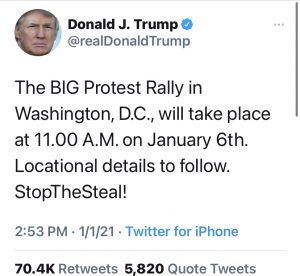 The Proud Boys were key players in protests and marches in mid-December that gave way to violent clashes between Trump’s supporters, counterprotesters, and law enforcement, as well as vandalism and destruction of property at churches in the city, including historic Black churches.

The local police said at the time that it would investigate the church attacks as potential hate crimes.

Tarrio then said on social media and in an interview with The Washington Post that he had burned the Black Lives Matter flag from the Asbury United Methodist Church, one of the oldest Black churches in Washington, and that he would plead guilty to destruction of property if he were faced with a criminal charge.

Washington is bracing for another round of protests on Wednesday when the Senate convenes to certify the results of the Electoral College. Pro-Trump groups including the Proud Boys are expected to protest, and law enforcement officials are preparing for more violence.

Tarrio had said on far-right message boards and the social media app Parler that the Proud Boys would “turn out in record numbers on Jan 6th,” but that they would fan out across the city “incognito.”