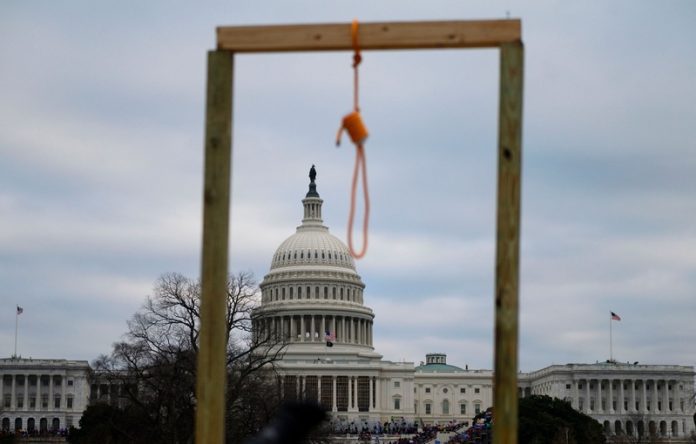 Two Capitol Police officers filed a civil suit Tuesday against former President Donald Trump for physical and emotional injuries they say they suffered as a result of the Jan. 6 Capitol riot.

In the lawsuit, James Blassingame, a 17-year veteran of the force, and Sidney Hemby, who has served as a Capitol Police officer for 11 years, quoted Trump’s words leading up to the riot, including Trump’s baseless claims of voter fraud and his assertion that Democrats were “trying to steal” the election.

The suit, filed in federal court in Washington, D.C., demands an award of at least $75,000 for each officer for each of the five alleged counts against Trump, as well as punitive damages and costs associated with the litigation. The counts include directing assault and battery, aiding and abetting assault and battery, directing intentional infliction of emotional distress, and violating D.C. statutes against incitement of a riot and disorderly conduct.

Officer Blassingame was one of “eight or nine” officers who rioters confronted in the crypt of the Capitol, directly below the rotunda, the suit alleges.

A “forceful surge of insurrectionists pushed forward and slammed Officer Blassingame against a stone column,” striking his spine and the back of his head, leaving him “unable to move,” the suit alleges.

“Foremost in Officer Blassingame’s mind was the terrifying certainty that the insurrectionists were interested in him and the other officers not going home to their families that night,” the lawsuit claims.

The suit also makes a claim similar to what Capitol Police officer Harry Dunn told ABC News Chief Justice Correspondent Pierre Thomas about the racial slurs hurled at officers who were on duty that day.

“For the first time in [Officer Blassingame’s] life, people were yelling into his face, calling him a [n-word] repeatedly and throughout the attack in the crypt. He lost count of the many times the racial slur was hurled at him,” the suit alleges.

The allegations in the suit paint an ugly, violent and vivid picture of the attacks it says Blassingame endured.

“The insurrectionists struck Officer Blassingame in his face, head, chest, arms, and what felt like every part of his body,” it says. “Insurrectionists used their fists and had weapons that ranged from flagpoles to stanchions and building directional signs, water bottles and other objects he could not identify.”

Blassingame’s “sole focus was to do what he could to survive,” the suit claims.

Blassingame alleges that he suffered back and head injuries and “is haunted by the memory of being attacked, and of the sensory impacts — the sights, sounds, smells and even tastes of the attack remain close to the surface.”

The suit also alleges that Blassingame “experiences guilt of being unable to help his colleagues who were simultaneously being attacked; and of surviving where other colleagues did not.”

Following the attack, Blassingame “was not able to sleep,” claims the suit, and he allegedly suffered from “depression that he could not address because he was too consumed with a sense of continued obligation to continue on with his professional responsibilities.”

Because he continues to work in the Capitol, “he is unable to avoid most of the triggers of his emotional reactions,” the suit claims.

Officer Hemby, the suit alleges, was “crushed against the doors on the east side trying to hold the insurrectionists back,” and that the rioters “continued to scream, ‘Fight for Trump,’ ‘Stop the steal,’ and various other slogans, as they struck him with their fists and whatever they had in their hands.”

Hemby also endured being “sprayed with chemicals that irritated his eyes, skin, and throat,” the suit alleges.

The suit alleges Hemby was “bleeding from a cut located less than an inch from his eye” and that he “had cuts and abrasions on his face and hands, and his body was pinned against a large metal door.”

As a result of the attack, the suit claims that Hemby’s “left hand and left knee became swollen and painful,” and that he suffers from back and neck pain and that his skin was burned from being “sprayed in the face and body with chemical sprays.”

Hemby also claims in the suit that he now suffers from trouble sleeping.

The lawsuit cites a litany of Trump’s tweets and public statements leading up to the attack, including his call for a “wild” protest on Jan. 6 and his promotion of “the baseless idea that Vice President Mike Pence could single-handedly reject the election outcome based on false claims that some states wanted to ‘decertify’ or ‘correct’ election results that were not in Trump’s favor.”

The suit also cites the words of a number of prominent Republican lawmakers who place the blame for the riot on Trump, including Sen. Mitt Romney, Rep. Liz Cheney and Senate Minority Leader Mitch McConnell, who after voting to acquit Trump on the charge of inciting the insurrection, took to the Senate floor on Feb. 13 and made clear his belief that Trump was responsible for the Capitol riot.

“There’s no question, none, that President Trump is practically and morally responsible for provoking the events of the day,” McConnell said. “The people who stormed this building believed they were acting on the wishes and instructions of their president, and having that belief was a foreseeable consequence of the growing crescendo of false statements, conspiracy theories and reckless hyperbole which the defeated president kept shouting into the largest megaphone on planet Earth.”

What McConnell said next is also cited in the suit, in support of how Trump may still be held accountable for his actions even though he’s no longer in office.

“President Trump is still liable for everything he did while he was in office, as an ordinary citizen, unless the statute of limitations has run, still liable for everything he did while in office, didn’t get away with anything yet — yet,” McConnell said. “We have a criminal justice system in this country. We have civil litigation. And former presidents are not immune from being held accountable by either one.”