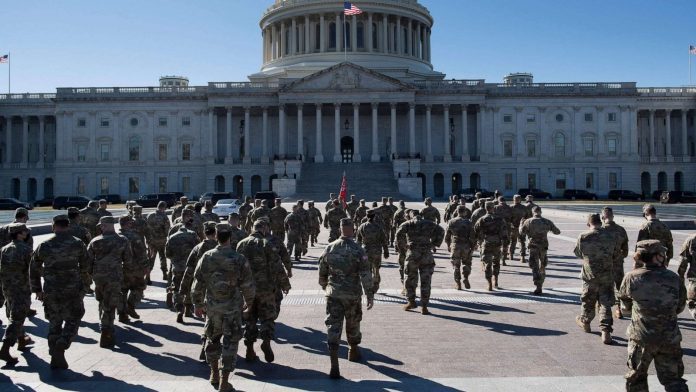 U.S. Capitol Police officials said Wednesday they have “obtained intelligence that shows a possible plot to breach the Capitol by an identified militia group on Thursday, March 4” — the date that far-right conspiracy theorists believe former President Donald Trump will return to power.

The intelligence is being taken “seriously,” the officials said in a statement posted on Twitter.

“We have already made significant security upgrades to include establishing a physical structure and increasing manpower to ensure the protection of Congress, the public, and our police officers, the statement said. “Our Department is working with our local, state, and federal partners to stop any threats to the Capitol. We are taking intelligence seriously. Due to the sensitive nature of this information, we cannot provide additional details at this time.”

The statement issued Wednesday morning follows another Tuesday night in which officials said they had beefed up security.

The threats appear to stem from QAnon, the umbrella term for a set of disproven and discredited internet conspiracy theories that allege the world is run by a secret cabal of Satan-worshipping cannibalistic pedophiles. Followers of the fringe movement believe that the 2020 U.S. presidential election was stolen from Trump, who has pushed baseless claims of voter fraud along with his allies.

QAnon followers also believed that Trump would not actually leave office on Inauguration Day but rather would declare martial law, announce mass arrests of Democrats and stop Joe Biden from becoming president. When that didn’t happen, the date was moved from Jan. 20 to March 4, the original inauguration day for all U.S. presidents prior to 1933.

The Federal Bureau of Investigation first labeled QAnon and its fluid online community of supporters as a “dangerous extremist group” in August 2019. A number of individuals believed to be QAnon followers have been charged for their alleged involvement in the deadly insurrection on Jan. 6, when pro-Trump supporters stormed the U.S. Capitol building in Washington, D.C.

On Monday, the U.S. Department of Homeland Security’s Office of Intelligence and Analysis issued a confidential assessment to law enforcement agencies, which was obtained by ABC News, saying that the threat of domestic violent extremism in 2020 — largely driven by “violent anti-government or anti-authority narratives, periods of prolonged civil unrest and conspiracy theories” — is a trend that will likely continue in 2021 and “could escalate to include the targeting of critical infrastructure.”