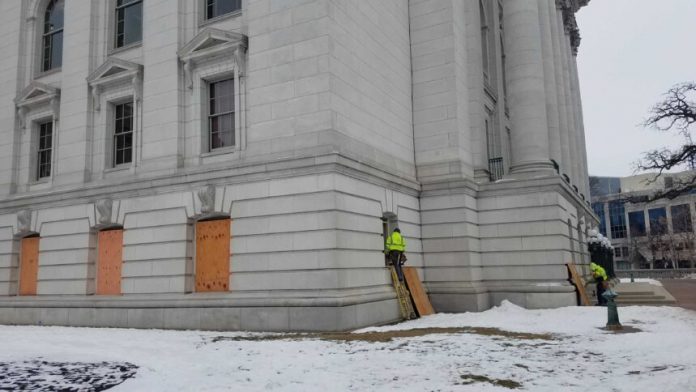 Windows at the state Capitol were boarded up Monday as a “precautionary measure” following violence at the U.S. Capitol on Jan. 6.

In a statement, a Department of Administration official told CBS 58 the boards were being put up to increase security to the building.

“In keeping with proactive cautionary measures happening at statehouses throughout the country, the Department of Administration’s Facilities Management team will be boarding exterior ground floor windows at the State Capitol beginning today,” Molly Vidal said in a statement.

“Once again, our state has asked our Citizen Soldiers in the Wisconsin National Guard to answer the call to keep our state, its citizens, and its institutions safe,” said Maj. Gen. Paul Knapp, Wisconsin’s adjutant general. “We ask a lot of our troops who must take leave from their civilian employers and their families, and I’m proud of the sacrifices they make on a daily basis to serve their fellow citizens.”

The mobilized troops will serve in a State Active Duty status in support of the Capitol Police. To protect operational security, the Wisconsin National Guard will not discuss troop numbers, movements, timelines, equipment, tactics, or procedures.

The actions come after the violence at the U.S. Capitol that left five people dead.

The FBI and Twitter both said there were active online discussions about violent activities occurring at government buildings across the country, including courthouses and state capitols.

“You know it’s really unfortunate that this is the world that we’re living in,” State Senate Majority Leader Devin LeMahieu (R – Oostburg) told CBS 58. “Any type of violence is unacceptable so I’m going to condemn any violence, whether it’s Republicans or Democrats, it just needs to stop right now.”

“[President Trump] just gives a carte blanche to just go and do it as if it’s some sort of right to go and to destroy and break into buildings,” Senate Minority Leader Janet Bewley said in an interview. “I don’t think that most people who want to demonstrate have any ideas like that in mind. But with words like that from the president, other people are just going to go and join the fray.”

In addition to boarding up the Capitol, there has been an increased presence of law enforcement from different agencies in and around the Capitol building. 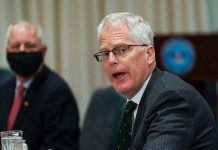 Abortion Barbara Sobel - May 17, 2021
0
The Supreme Court on Monday, May 17, 2021, agreed to hear arguments in a major abortion case from Mississippi that could roll back limits...

Coronavirus Barbara Sobel - May 16, 2021
0
The New York Yankees have had another positive COVID-19 test, this one involving a staff member, manager Aaron Boone said before their game against...

Coronavirus Barbara Sobel - May 16, 2021
0
Men now have one more compelling reason to get a COVID-19 vaccine — doctors suspect the new coronavirus could make it hard to perform...