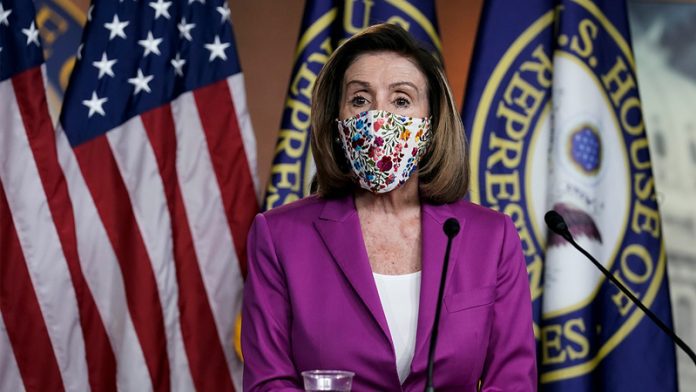 Speaker Nancy Pelosi spoke with the Pentagon’s top general about “preventing an unstable” Donald Trump from launching a military conflict or using his assigned codes to launch America’s nuclear weapons.

The bold move was announced by her office on Friday in a letter to House Democrats under a section titled “Preventing an Unhinged President from Using the Nuclear Codes”.

“This morning, I spoke to the chairman of the Joint Chiefs of Staff, Mark Milley, to discuss available precautions for preventing an unstable president from initiating military hostilities or accessing the launch codes and ordering a nuclear strike,” the speaker wrote. “The situation of this unhinged president could not be more dangerous, and we must do everything that we can to protect the American people from his unbalanced assault on our country and our democracy.”

The letter was released minutes before she was to join her caucus on a telephone conference to discuss their options for impeaching Trump following the violent and deadly riot at the Capitol building carried out at his behest on Wednesday. Five people have died so far after Trump, protesting at a rally over his election defeat, urged his backers to “fight” to overturn the results in favor of the president-elect, Joe Biden.

A vote on impeachment is increasingly likely next week.

“As you know, there is growing momentum around the invocation of the 25th Amendment, which would allow the vice president and a majority of the cabinet to remove the president for his incitement of insurrection and the danger he still poses. Yesterday, Leader Schumer and I placed a call with Vice President Pence, and we still hope to hear from him as soon as possible with a positive answer as to whether he and the cabinet will honor their oath to the constitution and the American people,” she said after reports that Mr Pence never came on the line.

Trump has shown no inclination to step down.

Instead, he posted a video on Thursday night acknowledging that there will be a “smooth” and “orderly” transition of power to Biden.

“A new administration will be inaugurated on 20 January,” Trump said. “My focus now turns to ensure a smooth, orderly, and seamless transition of power. This moment calls for healing and reconciliation.”

Still, he never conceded the 2020 race. And he never uttered the words “Joe Biden,” “president-elect” or “congratulations”.

After some of his loyalists took to social media platforms on Thursday night, saying that he had betrayed them, the president, reportedly still mulling another run for the White House in 2024, posted a tweet with an unapologetic message about the riot.

“The 75,000,000 great American Patriots who voted for me, AMERICA FIRST, and MAKE AMERICA GREAT AGAIN, will have a GIANT VOICE long into the future,” the president tweeted. “They will not be disrespected or treated unfairly in any way, shape or form!!!”