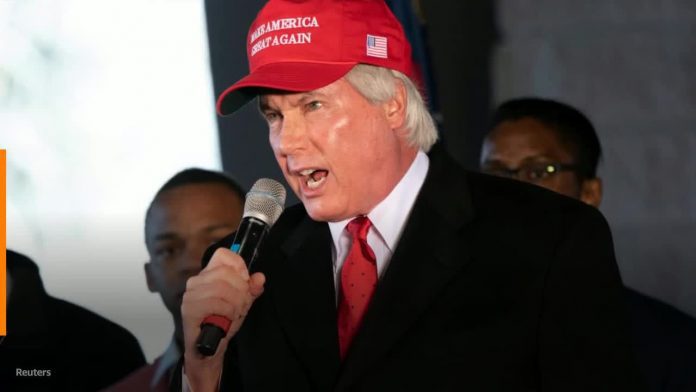 Lin Wood, an attorney and QAnon supporter closely tied to Trump who recently thrust himself into the spotlight by pushing wild conspiracy theories about the election and filing lawsuits on the president’s behalf, was permanently suspended by Twitter on Wednesday, January 6, 2021, after suggesting the mob takeover of the Capitol was staged.

Twitter did not comment on what prompted the suspension, but an archive of Wood’s tweets on Wednesday shows the attorney falsely suggesting the coup was “staged” by Antifa.

He also had continued a deranged attack on Vice President Mike Pence—accusing him of being a traitor and communist, among other things.

Wood’s Twitter bio included the acronym for a popular QAnon slogan, “Where we go one we go all.”

After he was banned by Twitter, Wood took to Parler to again call for Pence to be executed by firing squad. “Get the firing squad ready,” Wood wrote in a post on Parler. “Pence goes FIRST.”

Trump has ties to Wood: he met with the attorney in the Oval Office last year and Wood told the New York Times last month he and the president had conversed about “fraud and illegality” in the election more than once. The president recently praised the attorney for doing a “good job” in Georgia as he tries to overturn the election.