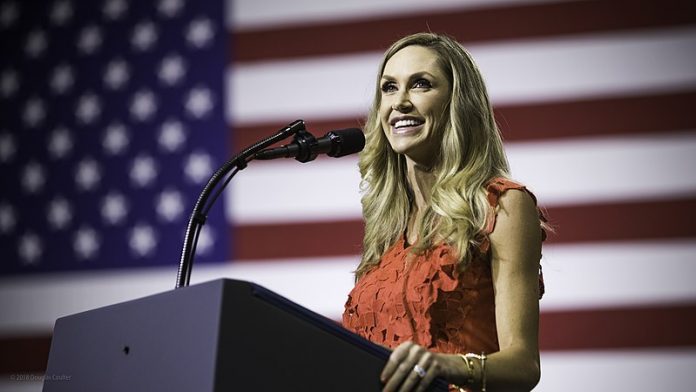 Donald Trump’s campaign is secretly paying one Trump son’s wife and another one’s girlfriend $180,000 a year each through the campaign manager’s private company, according to top Republicans with knowledge of the payments.

Kimberly Guilfoyle, the girlfriend of eldest son Donald Trump Jr., and Lara Trump, wife of middle son Eric Trump, are each receiving $15,000 a month, according to two GOP sources who are informal White House advisers and who spoke on condition of anonymity.

They were unsure when the payments began but say they are being made by campaign manager Bradley Parscale through his company rather than directly by either the campaign or the party in order to avoid public reporting requirements.

“I can pay them however I want to pay them,” Parscale told HuffPost on Friday, but then declined to comment any further.

Critics of the arrangement, including Republicans, said the setup was designed to get around Federal Election Commission rules that require campaigns, political parties, and other committees to disclose their spending in detail.

“A lot of people close to Donald Trump are getting rich off of his campaign,” said Paul Ryan, a campaign finance legal expert at the watchdog group Common Cause. “They don’t want donors to know that they’re getting rich. Because, at the end of the day, it’s donor money.”

Stuart Stevens, a top aide to 2012 GOP nominee Mitt Romney’s campaign, was even more blunt: “That’s why Parscale has the job. He’s a money launderer, not a campaign manager.”

Lara Trump, 37, was a campaign “surrogate,” making appearances and conducting media interviews on behalf of her father-in-law, in the 2016 campaign and continues to participate in “Women for Trump” events as a 2020 campaign “senior adviser.” In early 2017, Parscale confirmed he had hired her to work for his company, which was, in turn, continuing to work for Trump’s campaign.

Guilfoyle, 51, has been accompanying Donald Trump Jr. to campaign events since they began dating two years ago. She had been a Fox News personality until she left the network in 2018. In January 2020, she was named chair of Trump Victory, a joint fundraising committee used to solicit and distribute money to the Trump campaign and the Republican National Committee.

“She’s doing stuff, but she’s just like this silly cheerleader,” one of the White House advisers said of Guilfoyle. “She gets on these donor calls, and it’s ridiculous.”

The existence of the payments, but not the amounts, was first reported by The New York Times, which recounted a scene in which Guilfoyle confronted Parscale about why her payment checks were always late and Parscale responded that he would look into it. That incident took place on June 18, 2019, at a Trump reelection rally in Orlando, Florida, suggesting that payments to Guilfoyle had been taking place for some time.

FEC rules require that campaigns, political parties, and other committees disclose all expenditures, including payments to employees. But the Trump campaign and the RNC have been getting around it by routing many of their payments through Pascale’s private companies.

In all, Parscale’s firms ― Giles-Parscale and Parscale Strategy LLC ― have been paid $38.9 million by Trump’s campaign, the RNC, joint fundraising committees and a pro-Trump super PAC between the day Trump took office through February 2020, according to the latest filings available.

Numerous RNC officials and members did not respond to HuffPost query about the arrangement. One who did, Arizona committee member Bruce Ash, wrote: “Drop dead!”

Trump funneling donor money into his children’s households builds on his practice of funneling it into his own pocket, which began in 2016, right after he became the presumptive Republican nominee and began raising large amounts of GOP money. Trump immediately quintupled the rent he was charging his campaign at Trump Tower, from $35,458 per month to $169,758. He also began billing the campaign five- and six-figure sums for use of his hotels and golf courses for hosting fundraisers.

Those practices continued after his election and through to this day. His campaign still pays Trump Tower $37,542 a month in rent, even though it is based in a high-rise office building in Arlington, Virginia. The campaign and the RNC continue to host fundraisers at Trump’s properties, putting hundreds of thousands of dollars at a time into his own cash registers.

All of those entities are owned by the Trump Organization, which in turn is owned by a trust that Trump created after his election and of which he is the sole beneficiary.

The payments to Guilfoyle and Lara Trump may also complicate the Trump campaign’s efforts to attack presumptive Democratic nominee Joe Biden’s son Hunter Biden for accepting lucrative board memberships when his father was vice president.

Trump and his top aides in 2018 saw Joe Biden as the most dangerous threat to his reelection among the Democrats in the primary field and sought to damage his candidacy by raising questions about his son’s business activities. Indeed, Trump wound up getting impeached for trying to coerce the president of Ukraine into announcing an investigation into Hunter Biden, using $391 million in congressionally approved military aid as leverage.

Even some of the Republican senators who voted to acquit him said that what Trump did was wrong and illegal but not bad enough to warrant his removal from office.

Huffington Post: Trump Campaign Secretly Paying $180,000 A Year To His Sons’ Significant Others