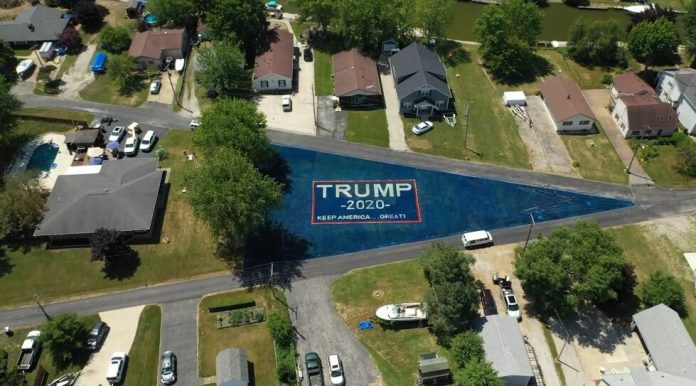 A Toledo native who attended the Jan. 6 Stop the Steal Rally in Washington D.C. and made national headlines last year for turning his yard into a Trump campaign sign is running for Congress.

J.R. Majewski, a Republican from Port Clinton, will challenge Rep. Marcy Kaptur, who is currently the longest-serving woman in the House of Representatives, in the next election cycle for Ohio’s Ninth Congressional District.

His campaign website describes him as a “common-sense conservative” candidate.

“Strong leadership joined together with hard work are the values and ethics upon which America was built and that is what I will bring to the table as Congressman for NW Ohio Congressional District 9,” his campaign website read. “Together, we can and will save America.”

If elected, Majewski said he would work to implement legislation to support equitable remote learning for students, provide funding for law enforcement agencies to fight human trafficking, and call on social media companies to fund research on mental health issues among children. He believes school closures amid the coronavirus pandemic caused educational disparities by failing to educate students, according to the campaign website.

Majewski told the Toledo Blade he was in attendance at the Stop the Steal Rally in Washington D.C. the day of the insurrection on Capitol Hill but said he did not enter the building. Many attending the rally believed in false conspiracy theories that the 2020 election was stolen from then-President Trump, but Majewski admits he hasn’t seen proof of that.

“I won’t sit here today and say that I have factual evidence that Joe Biden didn’t beat President Trump in a fair election. I can’t say that,” Majewski told the Blade. “But what I can say is there were enough things that caused concern or areas of question to the point that we should have been a little bit more intrusive from an auditing perspective.”

While states and localities across the country have seen legal challenges to election results, none have held up in court, and secretaries of state have not identified any significant voting irregularities.

According to Media Matters for America, a progressive non-profit research and information center, the user “RedPill78” has been banned from multiple social media platforms for promoting the lie about a stolen election. Majewski and the person behind the Red Pill 78 account reportedly traveled together to the Stop the Steal rally in January. On January 6, Majewski tweeted a photo of him accepting a plaque from the “Real Patriot Party.”

Majewski told the Blade he’s never read any “QAnon drop,” but did admit to associating with its followers.