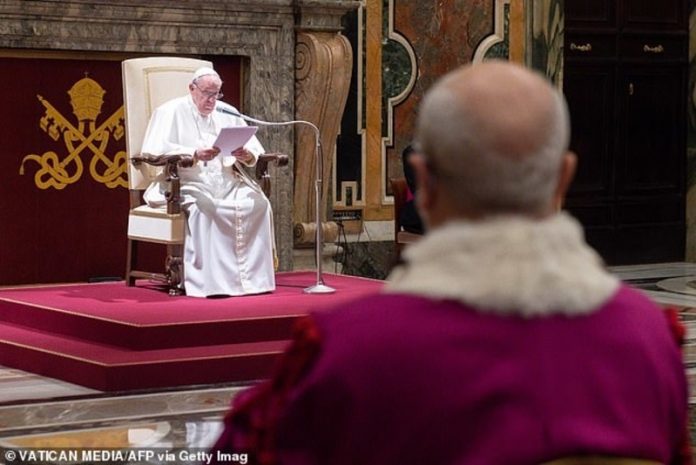 Pope Francis apologized for staying sitting during an audience on Friday, January 29, 2021, as he blamed the ‘troublesome’ sciatica that has caused him to cancel a number of events.

‘I would like to speak to you standing up but sciatica is a troublesome guest,’ the 84-year-old told members of the Roman Rota, a top Catholic Church tribunal.

‘So I apologize and will speak sitting down,’ he added at the meeting marking the opening of the Holy See’s judicial year.

The Argentine pontiff was forced to delegate two masses on Sunday and Monday and postpone his New Year’s greeting Monday for ambassadors to the Holy See due to a bout of sciatica.

He also skipped New Year’s masses at St Peter’s Basilica as a result of the chronic nerve condition that causes pain in his hip, and for which he wears orthopedic shoes.

However, he did lead the Angelus prayer on Sunday lunchtime as scheduled.

On the way back from a trip to Brazil in 2013, the pope told reporters about suffering a bout of sciatica in the weeks after being elected head of the Catholic Church earlier that year.

‘The worst thing that happened – excuse me – was an attack of sciatica – really! – that I had the first month because I was sitting in an armchair to do interviews and it hurt,’ he said when asked about his time in office so far.

The pope walks with a slight limp as a result of sciatica but has had a generally healthy life, despite having had part of his lung removed when he was a young man after developing pleurisy.

He received the coronavirus vaccine earlier this month alongside his predecessor, former pope Benedict XVI, who lives in a converted monastery in the Vatican gardens.