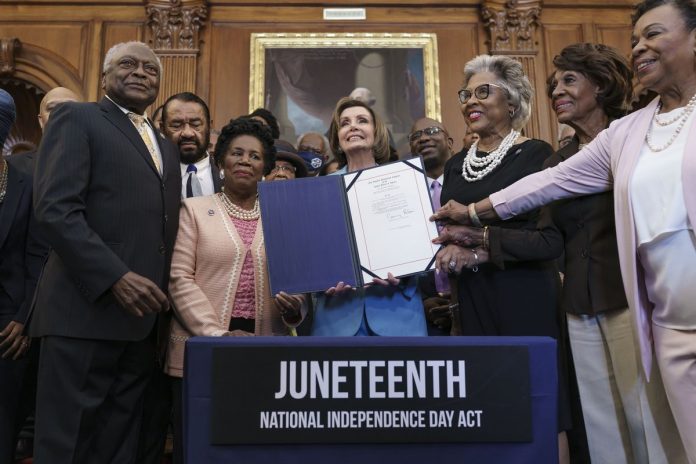 President Joe Biden Thursday, June 17, 2021, is expected to sign a bill which would make Juneteenth, or June 19, a federal holiday commemorating the end of slavery.

Juneteenth commemorates when the last enslaved African Americans learned they were free — two months after the Confederacy had surrendered. That was also about two and a half years after the Emancipation Proclamation freeing slaves in the Southern states.

The House voted 415-14 Wednesday to make Juneteenth the 12th federal holiday. All dissenting votes were from Republicans. The Senate passed the bill a day earlier under a unanimous consent agreement, which speeds up the process for considering legislation.

Will federal employees get Juneteenth off?

Under the legislation, the federal holiday would be known as Juneteenth National Independence Day. Once signed, it will be the first new federal holiday since Martin Luther King Jr. Day was created in 1983.

The U.S. Office of Personnel Management, which is the human resources office for the federal government, tweeted Thursday that most federal employees will observe the new holiday — Juneteenth National Independence Day — on Friday since June 19 falls on a Saturday this year.

Several states over the last several years have adopted Juneteenth as a statewide holiday. The vast majority recognize it as a holiday or have an official observance of the day, and most states hold celebrations. Juneteenth is a paid holiday for state employees in Texas, New York, Virginia, and Washington.

“Since I believe in treating everyone equally, regardless of race, and that we should be focused on what unites us rather than our differences, I will vote no,” he said in a news release.

But supporters say it’s an important mark of progress in race relations in the U.S. Rep. Bonnie Watson Coleman, D-N.J., said she viewed Juneteenth as a commemoration rather than a celebration because it represented something that was delayed in happening.

“It also reminds me of what we don’t have today,” she said. “And that is full access to justice, freedom, and equality. All these are often in short supply as it relates to the Black community.”