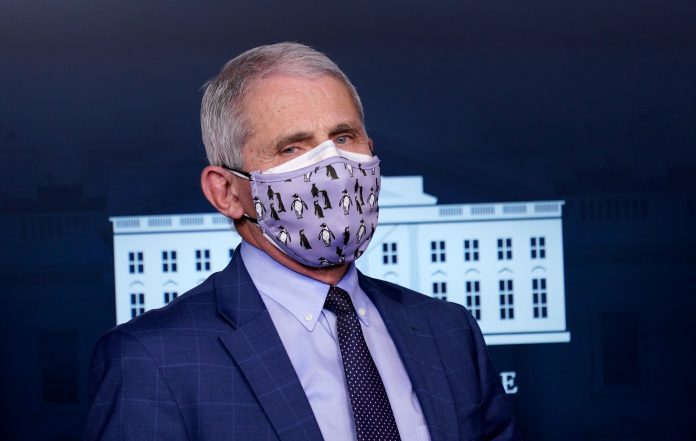 They say two heads are better than one, but can the same be said for masks?

The answer is yes, according to Dr. Anthony Fauci, the nation’s top infectious disease expert.

“So, if you have a physical covering with one layer, you put another layer on, it just makes common sense that it likely would be more effective,” Fauci told “NBC News’ TODAY” on Monday. “That’s the reason why you see people either double masking or doing a version of an N95.”

A study published in the peer-reviewed journal Matter in July found that wearing two masks could increase protection from virus particles by 50% up to 75%. It not only added an extra layer of protection but also made the mask fit snugger around the face, said Dr. Loretta Fernandez, study author and associate professor at Northeastern University.

“We found that the particle removal efficiency of many surgical style masks could be improved by up to 50% by simply snugging the mask material to the face,” she said. “In the lab, we did this by adding a nylon stocking, but also tested other elastic layers such as gators and tights and found that they also solved the problem of cutting off air leaking in from around the mask.”

Americans’ renewed interest in double masking also comes as variants that appear to be more contagious emerge from the U.K, South Africa, Brazil, and California.

Officials said last week that the U.K. variant, B.1.1.7, might be deadlier in addition to more contagious. The 501Y.V2 variant, first identified in South Africa, appears to be about 50% more contagious.

Dr. Vivek Murthy, Biden’s nominee for surgeon general, said in a New York Times interview that the emerging variants “make the quality of the masks we use all the more important,” adding there should be a standard for masks.

“The idea of double masking just simply means that you’re paying attention to wearing a better mask than you might have been before,” Emory University infectious disease expert Dr. Colleen Kraft said. “If people would just wear masks in general, we would actually be fine against the variants.”

The gold standard N95 masks are still hard to find and should be reserved for health care workers on the frontlines of the pandemic. But experts say KF94 masks, from South Korea, are a good second option.

Dr. Ashish Jha, dean of the Brown University School of Public Health, told the New York Times the KF94 mask is made of a similar material as the N95 and blocks 94% of viral particles. One notable difference is the KF94 has ear loops instead of elastic bands.

They’re also much cheaper, selling for about $40 on Amazon, though aren’t as reusable as cloth masks.

“Wearing a more substantial mask or a heavier mask is always fine, but again, we just need everybody to take ownership and do that at the same time,” Kraft said. “That’s what’s going to cut down our transmission the quickest.”