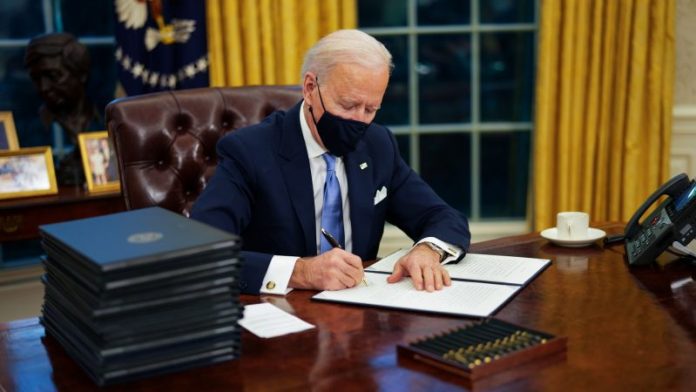 President Joe Biden on Wednesday, January 27, 2021, is set to sign several executive orders to tackle climate change and transition the country to a clean energy economy, the White House said on Wednesday.

The executive actions include establishing climate change as a national security priority, conserving at least 30% of federal land and oceans by 2030, and canceling new oil and gas leases on public lands and waters, according to a review of the orders released by the administration.

The administration said the climate actions will build modern and sustainable infrastructure while restoring scientific integrity in the federal government. The orders further the president’s agenda to cut carbon emissions from the electricity sector by 2035 and achieve net-zero emissions by 2050.

Biden, who has staffed the White House with a historic number of climate experts, signed an order last week to rejoin the U.S. into the Paris climate accord, a landmark agreement among nations to curb their emissions. He also canceled the construction of the Keystone XL pipeline from Canada to the U.S.

The president plans to deliver remarks and sign the orders at 1:30 p.m. Biden’s special climate envoy John Kerry and national climate advisor Gina McCarthy are set to brief reporters on the administration’s plans.

The Biden administration will also convene the Climate Leaders’ Summit on April 22, which will gather global leaders to discuss climate change issues. The summit will likely be remote during the coronavirus pandemic.