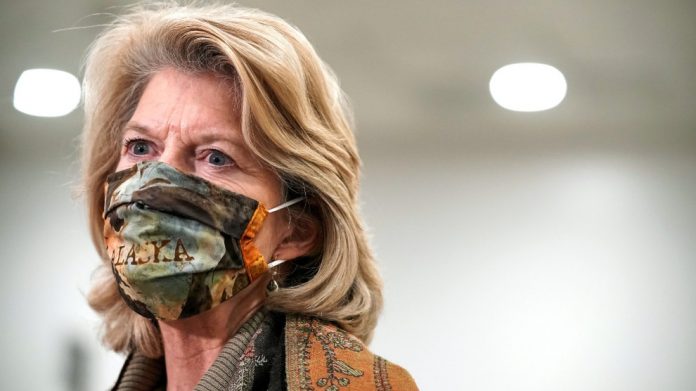 Republican officials in at least five Alaska state House districts have approved resolutions censuring U.S. Sen. Lisa Murkowski, and many of those officials said they believe the state party also will consider a resolution denouncing her.

The resolutions are at least partially motivated by Murkowski’s support for the impeachment of President Donald Trump, but several sponsors expressed wider discontent with the senator.

The districts’ actions set up a collision course with the state Republican Party organization, where chairman Glenn Clary has supported a “big tent” approach to party membership.

“If we’re going to win this game, if you will, or win at politics and maintain our freedoms … then we’re going to have to band together and not splinter ourselves,” he said during a Jan. 26 talk radio interview.

Republican officials in other states have expressed their disapproval of elected Republicans who supported impeachment, but Alaska’s Republican organization has remained relatively quiet until recently.

“I think the party will do what it may do. We’ve seen it happen in other states where my Republican colleagues who voted to convict have seen that pushback from within the party,” Murkowski said.

“I stand my ground. If I had to take that vote again, I would vote to uphold my oath of office. And, if the party is to censure me because they felt that I needed to support the party, they can make that statement, but I will make the statement again that my obligation is to support the Constitution that I have pledged to uphold, and I will do that, even if it means I have to oppose the direction of my state party.”

Many reasons for censure

Under Alaska Republican Party rules, a letter of censure is “an official rebuke and disapproval,” but it can also act as a political windsock, indicating a lack of support for a particular person.

In Homer, Republican district chairman Jon Faulkner said Murkowski’s support of the Trump impeachment was “the proverbial straw that broke the camel’s back” for Republicans in his district.

He said local Republicans have become disenchanted with Murkowski for a variety of reasons, including her vote on Obamacare (something he said demonstrated a lack of support for small businesses), a lack of support for Trump, overspending at the federal level, and “a spectrum of issues that we’ll call constitutional, but also social.”

“I think abortion is a big thing for a lot of people,” said North Pole district chairwoman Barbara Tyndall, who supervised a resolution of censure.

That resolution references a “pattern of disregard for core conservative principles.”

In the district that covers parts of Wasilla, Eagle River, and Butte, a resolution approved on Jan. 28 said Murkowski should be censured because registered Republicans should make a good-faith effort to support other Republicans, such as the president.

Election changes may limit the impact

Murkowski is up for reelection in 2022. A censure would normally be bad news for a candidate’s chances in the statewide primary, but Alaskans last year approved Ballot Measure 2, which changed the state’s election system.

Murkowski no longer has to pass through a Republican primary election like the one she lost in 2010. (A nearly unprecedented write-in campaign saw her reelected in November that year.)

Some Republicans are suspicious of the measure and believe Murkowski was behind it, citing the involvement of former Murkowski campaign officials and staffers who were deeply involved in the pro-measure effort.

“Everyone I talk to on the Republican side thinks it’s idiomatic — meaning, you know, A follows B, it’s about as proven as it needs to be,” Faulkner said. “I think that if you’re reporting on it, her fingerprints are all over.”

Ballot Measure 2′s principal author, a former Murkowski campaigner, has denied that the measure was intended to benefit her.

Murkowski herself said on Tuesday that it’s a mistake to think that she would act any differently without Ballot Measure 2.

“I have not shied away from making difficult or sometimes controversial statements or decisions,” she said. “I have I think I have a pretty demonstrated record of independence and bucking the party, and it certainly causes some issues within the party itself.”

Among Republican senators who were in office for Trump’s entire term, only Susan Collins of Maine and Rand Paul of Kentucky voted in line with Trump’s positions less than Murkowski.

Not all Republicans agree to censure

State chairman Clary has not responded to numerous requests for an interview, but he called into a conservative radio talk show last month to defend Murkowski and urge the host to stop attacking fellow Republicans.

“I wish, as a party chair, that Republicans would stop demonizing and categorizing each another and support each other … you may not vote for somebody, but that doesn’t mean that you have to demonize somebody and categorize somebody in this category called RINO,” Clary said, referring to the term “Republican In Name Only.”

He said Murkowski’s support for abortion rights is unacceptable for a Republican.

“The Republican Party is useless. It has failed, and people like Glenn Clary, who want to go along to get along by coddling Lisa Murkowski just because she’s powerful? It’s disgusting,” Fagan said.

Not all of Alaska’s local Republican officials support the effort to censure Murkowski. In House District 32, which sprawls across the Gulf of Alaska coast from Kodiak to Cordova, chairman Duncan Fields said he supports Murkowski.

He compared her impeachment role to that of a juror in a trial. A juror hears all the evidence for and against a suspect, Fields said, and it isn’t appropriate for him to judge that juror’s decision based only on what he has heard.

He believes there could be a silent majority of Republicans who support Murkowski, even if they don’t agree with every action she takes.

“I think there’s a good number of Alaska Republicans that like her conservative principles, that sort of Alaskan independent — I’m going to vote my conscience — that’s the Alaska thing to do,” he said.