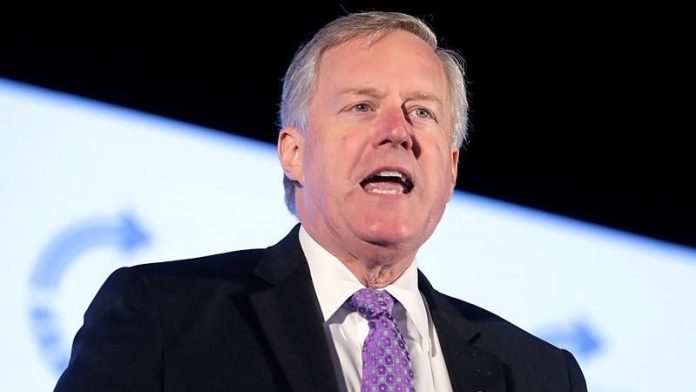 The House is expected to vote Tuesday, December 14, 2021, on whether former White House chief of staff Mark Meadows should be referred to the Justice Department for a criminal contempt charge over his refusal to answer questions about the Jan. 6 attack on the U.S. Capitol.

The committee investigating the pro-Trump riot voted unanimously to advance the measure Monday night, saying Meadows should face a criminal charge for defying the panel’s subpoena to testify. The House Rules Committee is scheduled to meet Tuesday morning to consider the resolution, the last step before a floor vote.

One of the documents the panel had planned to ask him about was an email he is alleged to have sent on Jan. 5 saying National Guard troops would be on hand to “protect pro-Trump people” the next day.

“It comes down to this: Mr. Meadows started by doing the right thing—cooperating. He handed over records that he didn’t try to shield behind some excuse. But in an investigation like ours, that’s just a first step,” the committee’s chair, Rep. Bennie Thompson, D-Miss., said Monday in a statement. “When the records raise questions—as these most certainly do—you have to come in and answer those questions. And when it was time for him to follow the law, come in, and testify on those questions, he changed his mind and told us to pound sand. He didn’t even show up.”

Meadows twice refused to attend scheduled depositions. The second was last Wednesday, a day after his book recounting his time as President Donald Trump’s chief of staff was released. In it, he recounts conversations with Trump and downplays the violence, which disrupted the counting of the electoral vote and led to over 700 arrests, as the work of “a handful of fanatics.”

“That he would sell his telling of the facts of that day while denying a congressional committee the opportunity to ask him about the attack on our Capitol marks a historic and aggressive defiance of Congress,” Thompson wrote in a letter to Meadows’ attorney.

Meadows’ lawyer, George J. Terwilliger III, sent a letter Monday asking the committee not to proceed with the contempt vote, saying it would be “contrary to law” because Meadows is making “a good-faith invocation of executive privilege and testimonial immunity.”

The letter did not tackle why executive privilege should apply to a former official when the current president is not invoking it — a question central to the panel’s legal fight over Trump’s records.

The committee on Monday revealed previously undisclosed text messages to Meadows around the time of the attack. The texts were sent by Fox News hosts, Donald Trump Jr., and lawmakers whom the committee did not name.

Some of the texts urged Meadows to get the president to call off the rioters at the Capitol, and at least one from an unnamed lawmaker said, “Pence, as President of the Senate, should call out all electoral votes that he believes are unconstitutional as no electoral votes at all.”

A contempt referral would not be the first one stemming from the Jan. 6 investigation.

The House voted this year to refer former Trump adviser Steve Bannon to the Justice Department for contempt charges after he defied the committee’s subpoenas.

The Justice Department acted on the recommendation, which it does not always do. Bannon has been charged with two counts of contempt and could face up to a year in prison and a $100,000 fine if he is convicted. He has pleaded not guilty and is scheduled to stand trial in July