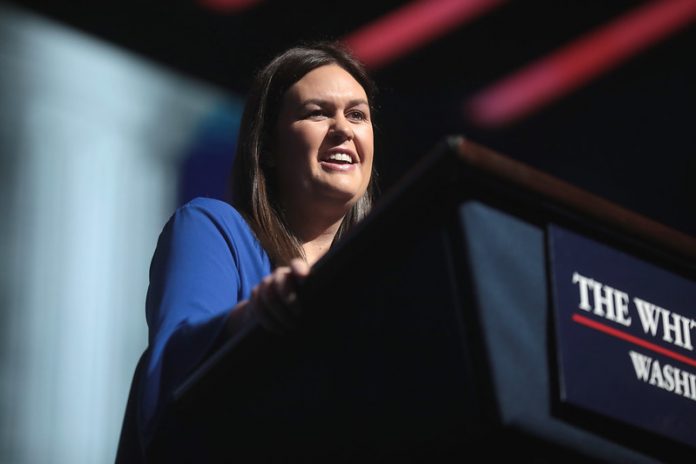 Donald Trump told Sarah Sanders she would have to “go to North Korea and take one for the team”, after Kim Jong-un winked at the then-White House press secretary during a summit in Singapore in June 2018.

Trump denies ‘series of mini-strokes’ after book reports mystery hospital visit
Read more
“Kim Jong-un hit on you!” a delighted Trump joked, according to Sanders’ new memoir. “He did! He fucking hit on you!”

Speaking for Myself will be released next Tuesday. The Guardian obtained a copy.

Rather than a tell-all by a former staffer or a burn-all by a hostile family member, the book is a paean to the president by a loyal follower with the subtitle Faith, Freedom, and the Fight of Our Lives Inside the Trump White House.

Sanders is from a notable Republican family – her father is Mike Huckabee, a candidate for the presidential nomination in 2008 and 2016 – and reportedly has her eye on a run for governor in Arkansas.

However, somewhat in the manner of leaked sections that took aim at the former national security adviser John Bolton after he turned on Trump, Sanders does describe boorish or misogynistic behavior by the president and senior aides that may make campaign aides wince, particularly as Trump trails Joe Biden among women.

Of the incident with Kim, whom Trump courted assiduously in the first two years of his presidency, Sanders describes a session at the Singapore talks in which the dictator “reluctantly” accepted a Tic Tac from Trump, who “dramatically blew into the air to reassure Kim it was just a breath mint” and not a capsule of poison.

The two men also talked about sports, including women’s soccer. Then, Sanders writes, she looked up “to notice Kim staring at me. We made direct eye contact and Kim nodded and appeared to wink at me. I was stunned. I quickly looked down and continued taking notes.

“… All I could think was, ‘What just happened? Surely Kim Jong-un did not just mark me!?’”

Later, in the presidential “Beast” limousine on the way to the airport, Sanders relayed the incident to Trump and his then chief of staff, John Kelly.

Sanders, a devout Christian who discusses her faith throughout her book, does not spell out the presidential expletive. But she does write that she told Trump that was not what she meant, and said: “Sir, please stop.”

Kelly backed up the president and Trump joked: “Well, Sarah, that settles it. You’re going to North Korea and taking one for the team! Your husband and kids will miss you, but you’ll be a hero to your country!”

Trump and Kelly, Sanders writes, “howled with laughter” as the car drove on.

Trump has met Kim three times – in Singapore, in Hanoi and in the demilitarised zone between North and South Korea. He has not convinced Kim to give up his nuclear weapons, which Sanders says would take a “miracle”.

In his own memoir of the Trump administration, Bolton does not mention the Singapore incident Sanders describes, though he does say Trump talked sports with Kim and “handed out mints”. Bolton also says aides did not want to leave Trump alone with Kim, lest he make damaging concessions.

Sanders describes other aspects of Trump’s North Korea policy, including interactions with Dennis Rodman, the former NBA star who has established a unique relationship with Kim, and the release in May 2018 of three Americans formerly held by Pyongyang.

She does not mention Otto Warmbier, a student from Ohio held in the North before being returned to the US in June 2017, in a coma and showing evidence of torture. The 22-year-old died soon after.

Warmbier’s parents have said they hold “Kim and his evil regime … responsible for unimaginable cruelty and inhumanity. No excuses or lavish praise can change that.”

Though Trump admitted in Hanoi that “some really bad things happened to Otto”, he also said: “Kim tells me that he didn’t know about it and I will take him at his word.”

The Guardian: Trump told Sarah Sanders to ‘take one for the team’ after Kim Jong-un wink