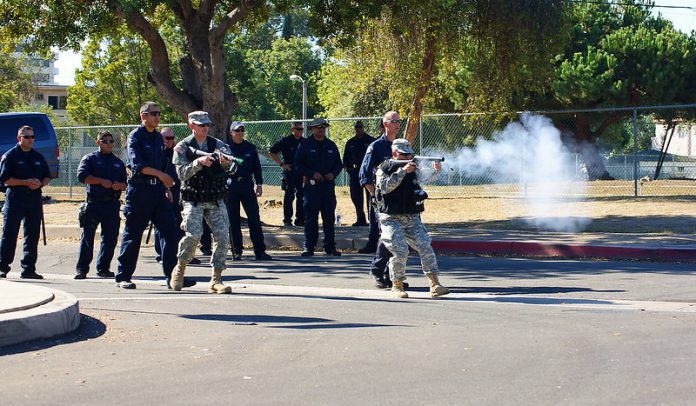 Before tear gas was an instrument of the police, it was an instrument of war. French, German, and American chemists all experimented with poisonous gases during World War I, and tear gas was specifically developed as a way to force opposing fighters out of the trenches and into the open fields where they could be killed. After the war ended, US military officials wanted to figure out a way to keep using the gaseous products they had worked so hard to produce.

“The military R&D kind of fought to stay on after the war had ended, and so there was a lot of PR promo for this idea of wartime weapons for peacetime uses,” says Anna Feigenbaum, a researcher who wrote the book Tear Gas: From the Battlefields of World War I to the Streets of Today. One of those weapons was tear gas.

During the 1920s, the US Army’s Chemical Warfare Service, led by Maj. Gen. Amos Fries, campaigned to police departments across the US on why law enforcement should use tear gas as a crowd control measure. They advertised the gas as a more humane way to disperse unruly crowds since people didn’t die when coming in contact with the gas. “There was also a sense that it was cheap,” says Feigenbaum, “cheap to produce and cheap to buy. And it doesn’t take a lot of training to use it, so they could deploy it quite quickly.”

Since then, tear gas has become a ubiquitous tool that police departments around the country use against protestors and demonstrators. Many different forms of the gas exist, but perhaps the most common type used today is made from the compound chlorobenzylidene malononitrile — more commonly known as CS gas. When deployed, the gas targets three parts of the body: the respiratory system, the eyes, and the skin.

“The most significant is the respiratory system so you feel like you can’t breathe, or that you’re choking,” says Rohini Haar, a research fellow in the Human Rights Center at the University of California at Berkeley and medical expert with Physicians for Human Rights. “And then, of course, the eyes, which start tearing but more commonly, there’s a burning and searing pain in your eyes. And then on your skin, it feels like a burning pain.” Ultimately, there isn’t much research on the effects of tear gas, but the Centers for Disease Control and Prevention warns that prolonged exposure may lead to eyesight problems and that tear gas can exacerbate respiratory issues. There are also many anecdotes connecting tear gas to menstrual changes and even miscarriages in women.

In the United States, the amount of tear gas deployed against the public coincides with the number of demonstrations happening in the country at any one time. Police deployed a significant amount of tear gas throughout the 1920s and ‘30s during labor movement protests and then again during the Civil Rights era and during protests against the Vietnam War. The gas has reappeared now that millions are routinely protesting police brutality in the wake of the police killings of George Floyd, Breonna Taylor, and many others. Although police departments use tear gas even when there’s not a social movement happening. “There’s always been tear gas used on protesters,” says Feigenbaum, even not during times of massive mobilization.

Tear gas is actually banned for use in wartime because the Geneva Convention notably prohibits the use of chemical or biological weapons during war. More recently, in 1993, the United Nations convened the Chemical Weapons Convention (CWC), which prohibits countries from using riot control agents — such as tear gas — “as a method of warfare.” However, the CWC lays out an exception for law enforcement to use things like tear gas for “domestic riot control purposes.”

The idea behind this exception was that police officers would likely be deploying tear gas defensively, according to Feigenbaum. But despite UN and police department guidelines outlining the amount of force that should be used against crowds, police are often documented using tear gas offensively — and in bulk — to move demonstrators out of an area.

“There’s no actual regulation of how much is used,” says Feigenbaum, adding, “Lots and lots and lots of tear gas is used beyond what is sort of prescribed by the manufacturers.” It’s also not as traceable as, say, a gun. “Usually if a cop fires a gun, you know where the bullet came from because everything’s registered right back to the police officer,” says Feigenbaum. “But that’s not the case for non-lethals. One of the reasons that police can use those with impunity is because there isn’t technical accountability between the weapon and the officer.”

Tear gas has lately become something of a staple for protests; clouds of it are often visible in videos taken of demonstrators as they clash with police in the streets. It’s almost a normal sight now, an acceptable form of punishment. “Tear gas was transformed into a humane technology,” says Feigenbaum. “You’re actually supposed to be thankful you’ve been tear-gassed because you’re not being shot.”