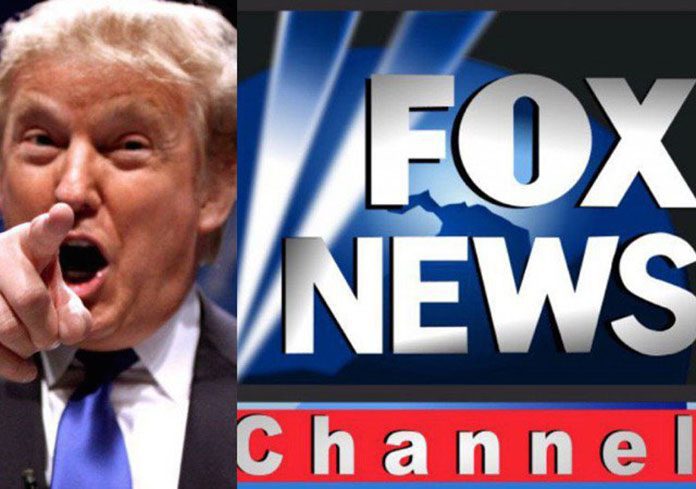 President Donald Trump and his allies have settled on a new and deeply cynical talking point now that it seems unquestionable that his lax response to the novel coronavirus that causes COVID-19 will contribute to a horrific body count. Trump was slow to act on what is now a global pandemic, this argument goes because he was distracted by his impeachment for abuses of power and obstruction of Congress in the early days of the virus’s spread. “Let’s be honest. Impeachment hurt Trump’s response to coronavirus.” reads the headline of a March 23 piece by Washington Post columnist Henry Olsen that apparently revived the claim, which had floated around Fox News earlier in the month. Senate Majority Leader Mitch McConnell (R-KY) and Trump himself have since gotten into the act.

This claim is deeply stupid. Trump has said he would have done nothing different even if impeachment hadn’t happened. Several key Trump administration actions that undermined U.S. capacity to respond to a pandemic happened years ago. The lead agencies involved in flubbing the coronavirus response played no role in impeachment. The policy decision Trump constantly highlights as evidence that he was ahead of the curve in addressing coronavirus occurred as he was on trial in the Senate. Trump made numerous public comments downplaying the effects of coronavirus during the impeachment trial and continued to do so for weeks following his acquittal. Federal failures to ensure a steady supply of tests and personal protective equipment for health workers continue to this day. And as impeachment was underway, the president maintained time in his schedule for political rallies and time at the golf course, belying claims that he was overburdened.

In fact, a review of Trump’s tweets finds that he was frequently distracted during this period — by his typical habit of devouring and tweeting about Fox News’ sycophantic coverage of his administration. The government of Wuhan, China, first confirmed it was grappling with pneumonia cases of unknown origin on December 31. From January 1 through his February 5 Senate acquittal, Trump sent 72 tweets in response to Fox News or Fox Business programming, live-tweeting the networks on 22 separate days. He added 49 more Fox live tweets on 18 different days through the end of the month, as the virus spread around the world and claimed its first recorded U.S. death. While some of the president’s live tweets respond to the network’s coverage of impeachment, others run the gamut of news topics from the time.

It is instructive to map Trump’s live tweets against important events from the coronavirus crisis over this two-month period when the president was supposedly too distracted by impeachment to competently respond to the pandemic.

On January 11, Chinese state media announced the first recorded death from the disease caused by the coronavirus. That day, Trump sent five live tweets of Fox & Friends’ weekend edition, responding to the program’s commentary about topics including the FBI’s Russia probe (“are these ‘dirty cops’ going to pay a big price for the fraud they committed?”), the Democratic response to the U.S. assassination of an Iranian leader (“unhinged”), and Nancy Pelosi (“the absolute worst Speaker of the House in U.S. history!”).

On January 21, the first U.S. case was confirmed in Washington state. The next day, Trump sent a tweet in response to an interview with House Minority Whip Steve Scalise (R-LA) on Fox’s America’s Newsroom. 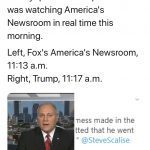 On January 23, Chinese authorities closed off Wuhan in an effort to contain the epidemic to the city. Trump sent 27 Fox live tweets over the next four days, culminating with one in which he tweeted an incorrect number of victims in the helicopter crash that killed former NBA player Kobe Bryant, apparently because he was watching Fox’s coverage on a delay. 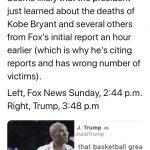 On February 5, as the cruise ship Diamond Princess was quarantined off the coast of Japan, Trump tweeted Republican strategist Brad Blakeman’s observation on Fox about the Democratic caucus in Iowa.

On February 14, the first death was recorded in Europe. That day, the president tweeted a comment from Fox host Laura Ingraham claiming he has supposedly “done more to help the Black community than any President in the modern era.”

And on February 23, as the number of coronavirus cases spiraled out of control, Italian officials locked down 10 towns in the Lombardy region. The next day, Trump sent five Fox live tweets, endorsing a book by an author who had just been praising him on the network and quoting segments about the Russia probe and comments by Supreme Court Associate Justice Sonia Sotomayor.

Trump was no more distracted as coronavirus spread in the U.S. than he has been at any other point in recent memory — and the primary cause, as ever, was his favorite cable news channel.

Media Matter: While coronavirus spread across the globe, President Trump was busy doing what he always does: Tweeting about Fox News

JAMA Study: People Who Got The Moderna Vaccine Say They Have More Side Effects