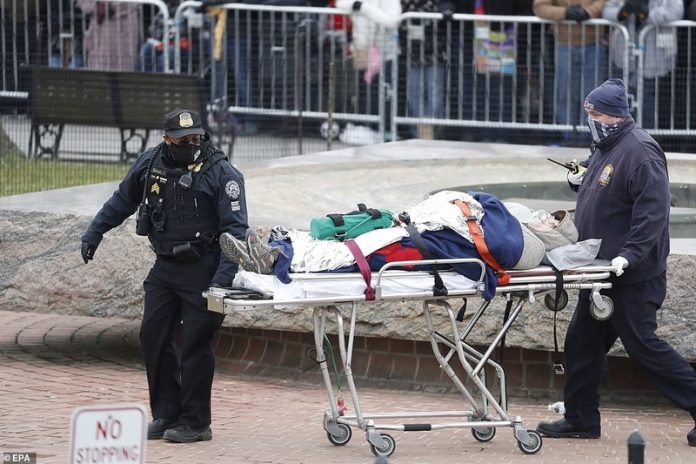 Capitol Police ‘have guns drawn aimed at the door’ inside the US House chamber as supporters of President Trump are smashing the glass in the entrance doors in an attempt to get inside while Donald Trump Jr urged supporters of his father to exercise calm after they overran Capitol Police.

Supporters of the president fought their way through barricades and police lines and were seen marching through Statuary Hall after President Trump urged crowds at the ‘Save America’ rally in Washington D.C. to march on Congress and ‘cheer on our brave senators and congressmen’.

President Trump tweeted on Wednesday: ‘Please support our Capitol Police and Law Enforcement. They are truly on the side of our Country. Stay peaceful!’

Trump supporters also addressed the crowd of thousands, including his personal attorney Rudy Giuliani, who called for a ‘trial by combat’ in contesting the election results.

We’re going to walk down to the Capitol and we’re going to cheer on our brave senators and congressmen and women,’ Trump said during the ‘Save America’ rally near the White House on Wednesday.

But after protesters stormed the building, the president’s son begged for calm and the mayor of Washington, DC, ordered a 6 pm curfew.

‘This is wrong and not who we are,’ President Donald Trump’s eldest son tweeted on Wednesday.

‘Be peaceful and use your 1st Amendment rights, but don’t start acting like the other side. We have a country to save and this doesn’t help anyone.’

The United States Capitol building is in lockdown after hundreds of supporters of President Trump stormed the barricades surrounding its perimeter and were met with police who used pepper spray during Wednesday’s historic joint session of Congress which was convened to ratify President-elect Joe Biden’s victory.

The US Capitol Police released a statement saying: ‘All buildings within the Capitol Complex, Capitol: External security threat, no entry or exit is permitted, stay away from exterior windows, doors. If outside, seek cover.’

Multiple police officers were injured just outside of the Capitol after violent clashes with supporters of the president who tried to approach the steps of the building.

Meanwhile, a member of Congress said she had to evacuate her office in the Cannon House Office Building because of a reported pipe bomb, although Capitol Police later said that there was no threat.

‘I just had to evacuate my office because of a pipe bomb reported outside. Supporters of the President are trying to force their way into the Capitol and I can hear what sounds like multiple gunshots,’ said House Rep. Elaine Luria of Virginia.