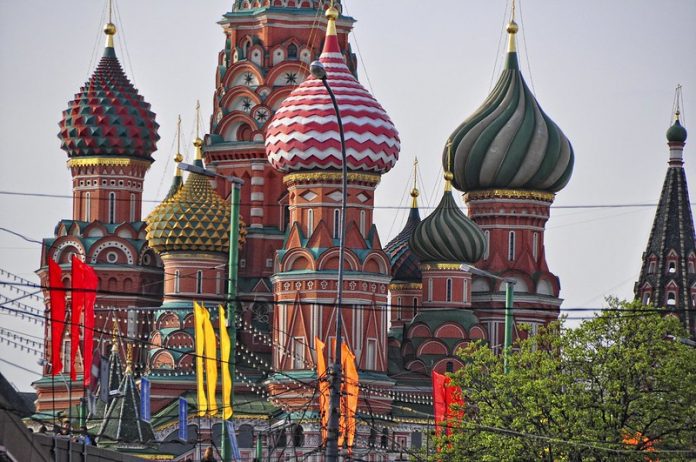 The Trump Organization reregistered the domain name TrumpTowerMoscow.com this June, internet records show, suggesting that contrary to President Trump’s claims, the company has not necessarily abandoned its pursuit of the lucrative real estate deal that figured prominently in multiple investigations into his connections with Russia.

The Trump Organization has re-upped the domain every year of his presidency. This year it renewed its ownership on June 9, under a company called DTTM Operations, which Trump’s financial disclosures show manages more than 100 company trademarks. DTTM Operations appears now to have registered a total of more than 3,000 domains, according to a whois search, including renewals for TrumpRussia.com, TrumpTowerLondon.com, and DonaldTrumpSucks.com — 2,000 more than reported in 2017.

The domain was first registered in 2008, according to internet “whois” lookups, but the Trump Organization was not the first buyer. Longtime Trump associate Felix Sater, a Russian-born businessman whose efforts to build the Moscow tower date back to the early 2000s, told Salon that he turned ownership of the domain over to the Trump Organization in 2015 when Trump signed a letter of intent to develop the project.

The domain was first reported in early July 2017, about two months before the Washington Post’s bombshell report that during the 2016 presidential campaign, the Trump Organization had tried to strike a deal with Russian developers to build the luxury hotel and condo tower. A series of BuzzFeed News reports starting the next year illustrated the significant progress the project had made and the extent of Donald Trump’s involvement.

Initially envisioned as the tallest building in Europe, Trump Tower Moscow was spearheaded on the Trump side by Sater and former Trump attorney Michael Cohen and included the personal involvement of Ivanka Trump. But even with a Russian developer on board, the project needed the blessing of government officials to get off the ground, a responsibility that fell to Cohen.

At one point the company proposed awarding Russian President Vladimir Putin the $50 million penthouse suite for free, a quid pro quo for the green light to break ground, and which had Trump’s approval.

While Trump repeatedly denied having any “deals” with Russia, documents show that tower plans progressed well into the design phase. That proposal became a focal point of special counsel Robert Mueller’s investigation, which eventually charged Cohen with lying to Congress, largely to minimize the extent of Trump’s involvement in the deal. (Cohen says he was encouraged in this by one of Trump’s attorneys, and Ivanka Trump reportedly reviewed his testimony in advance.)

Trump has insisted throughout his term that the Russia probe was a “witch hunt,” but the continuing annual domain purchases indicate that his company has put money into the idea each year of his presidency.

“He’s as bad a liar as he is a president,” Cohen told Salon. “How stupid can someone be who refutes over and over again the continuation of a real estate project, while simultaneously paying to keep the domain name active? What’s more, they’re not even bothering to anonymize it, but slapping the Trump brand on it. Hence why I use the term stupid: His arrogance translates into idiocy. Does Trump really believe that the people of this country are ignorant?”

“It would be comical,” Cohen said, “if it weren’t really happening.”

The annual domain registries, and especially the 2015 handoff to the Trump Organization with Trump’s commitment to the project, are new dots in a constellation of redemption for Cohen, who, after pleading guilty to lying, has since launched a campaign to tell the truth about his former boss — claims that to date have led directly to at least two government investigations into the president’s business dealings.

Cohen’s confessions, moored by corroborating documents, have even pulled Trump a few steps closer to the truth.

“We were thinking about building a building,” Trump admitted to White House reporters in November 2018, after years of denials and months after Cohen’s perjurious testimony to protect him.

“I decided ultimately not to do it. There would have been nothing wrong if I did do it,” Trump said. He repeated three times something he had denied throughout his campaign: “Everybody knew about it.”

“Everybody knew about it. It was written about in newspapers. It was a well-known project,” Trump said, none of which is true. “It was during the early part of ’16 and, I guess, even before that. It lasted a short period of time.”

According to Cohen, Trump wanted to visit Russia during the 2016 campaign in order to personally meet Putin and jump-start the tower negotiations — a plan Sater confirmed to Salon in a phone call.

However, Trump and his associates in the U.S. and Russia kept a lid on the story through the election and beyond. (Russia granted Trump six trademarks in 2016, including four on Election Day.)

“I have no dealings with Russia,” Trump said shortly before his inauguration in 2017. “I have no deals that could happen in Russia because we’ve stayed away.”

This week the New York Times reported that Trump’s tax returns show that the president maintains a previously unknown bank account in China, which according to a company spokesperson was opened “to explore the potential for hotel deals in Asia” and which has incurred nearly $200,000 in local taxes.

“Though the bank account remains open, it has never been used for any other purpose,” the spokesperson claimed.

Asked whether the domain renewals, amid years of fending off allegations of improper ties with Russia, suggest that Trump was keeping his post-presidency options open, Cohen dismissed the idea.

“The business does not survive” after Trump leaves office, he said. “There’s too much scrutiny, and too much knowledge.”