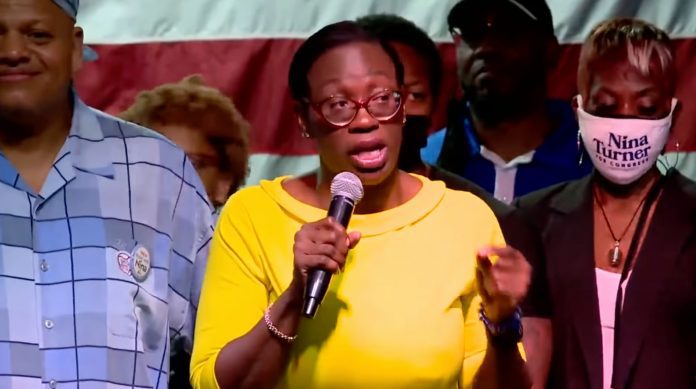 Nina Turner, Who Raised More Money Than Shontel Brown, Claims She ‘Did Not Lose The Race’, ‘Evil Money Manipulated’ Election

Nina Turner is facing blowback from both sides of the political aisle after she blamed her special election primary loss Tuesday night in Ohio on “evil money.”

During her concession speech Tuesday night, Turner characterized the election as one manipulated by “evil money.”

“I am going to work hard to ensure that something like this never happens to a progressive candidate again. See, we didn’t lose this race — evil money manipulated and maligned this election,” she said, according to a video posted by Newsweek.

“See, I don’t want you to relent, because it took evil money,” she continued. “They took evil money to come in here and do this. Well, I swear to you, that as sure as there is a God in heaven, sister Turner is going to continue working with every fiber of her being until true justice reigns.”

The Ohio race highlighted the deepening rift between the Democratic Party’s left wing and its establishment. Turner is a “Squad”-backed progressive who was endorsed by Sanders and Reps. Alexandria Ocasio-Cortez and Ilhan Omar, while Brown was backed by Sanders’ former rival Hillary Clinton, leaders of the Congressional Black Caucus, and Jewish Democrats who favored her outspoken support for Israel.

According to Jewish Insider, Jewish community members in the district, who represent a sizable and politically active voting bloc, were “particularly energized” by Brown’s candidacy and had launched an “aggressive” canvassing campaign on her behalf.

Liberal and conservative critics on social media called Turner’s “evil money” comments anti-Semitic. They also pointed out that Turner outraised Brown by roughly $2.4 million, according to The Columbus Dispatch. Others compared Turner to former President Trump, who still claims he was the rightful winner of the 2020 presidential election. 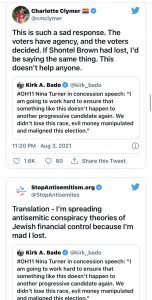 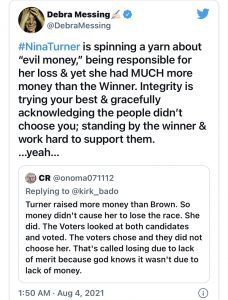 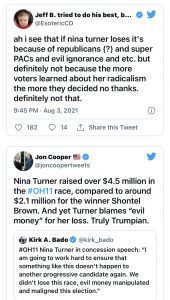 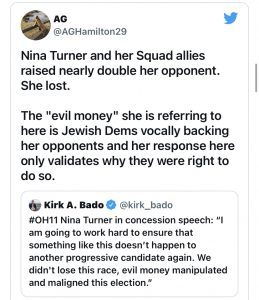