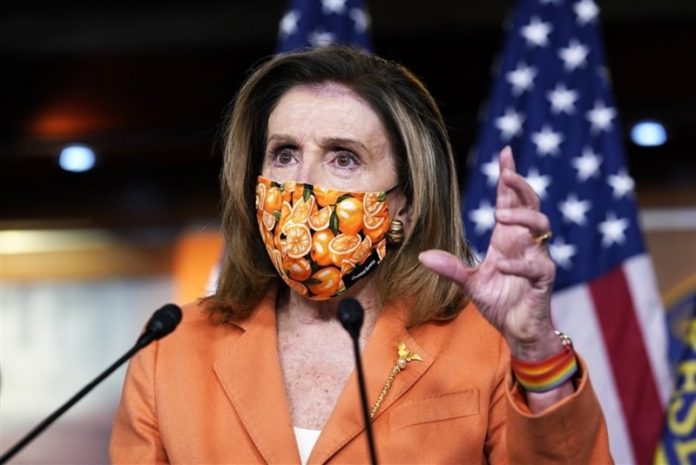 Democrats in the US Congress have announced a plan to create a commission to review whether Donald Trump is capable of carrying out his presidential duties or should face removal from office.

The office of the House speaker, Nancy Pelosi, announced a press conference set for October 9, 2020, about the bill after she expressed concern that Trump, who is under treatment for coronavirus at the White House, is suffering a “disassociation from reality”.

The president has unleashed a barrage of erratic and self-contradictory tweets and declarations in recent days that have left staff scrambling and raised concerns over his stability.

In a zigzagging interview on the Fox Business channel on Thursday, his first since being hospitalized, Trump, 74, boasted: “I’m back because I am a perfect physical specimen and I’m extremely young. And so I’m lucky in that way.”

Pelosi, who is negotiating a Covid-19 economic stimulus plan, responded at her weekly press conference: “The plan isn’t for the president to say that he’s a perfect physical specimen. Specimen, maybe I can agree with that … And young, he said he was young.”

Trump “is, shall we say, in an altered state right now” and “the disassociation from reality would be funny if it weren’t so deadly,” the 80-year-old speaker added while wearing a mask.

Trump reacted angrily to Pelosi’s maneuver, tweeting: “Crazy Nancy is the one who should be under observation. They don’t call her Crazy for nothing!”

He also retweeted Republican allies, including the congressman Mark Green, who posted: “I wouldn’t put it past @SpeakerPelosi to stage a coup. She has already weaponized impeachment, what’s to keep her from weaponizing the 25th amendment? We need a new Speaker!”

In the surprise move on Thursday, Pelosi revealed that Democrats will meet to focus on the 25th amendment to the constitution, which contains a clause that allows a president to be removed from office against his will because of physical or mental incapacity.

Her office followed up with the announcement that Pelosi and the congressman Jamie Raskin of Maryland will hold a press conference at 10.15 am on Friday “to discuss the introduction of the Commission on Presidential Capacity to Discharge the Powers and Duties of Office Act”.

The legislation will create the body and process called for in the 25th amendment to “enable Congress to help ensure effective and uninterrupted leadership in the highest office in the Executive Branch of government”, it added.

Although the 25th amendment enables Pelosi to create such a panel to review the president’s health and fitness for office, the House of Representatives would not be able to remove Trump from office without the agreement of the vice-president, Mike Pence, and members of the cabinet. They have given no hint that such a move is imminent.

The Democratic-led House impeached Trump last year on charges of abuse of power and obstruction of Congress after he sought to pressure Ukraine for political favors. The Republican-controlled Senate did not convict him.

Trump tweeted last Friday morning that he had tested positive for coronavirus, and he was flown to a military hospital that evening. After a three-night stay, including a car ride to wave to his supporters, he flew back to the White House and caused outrage by removing his mask.

He has received various treatments including doses of Remdesivir, an anti-viral drug, supplemental oxygen, a controversial experimental antibody treatment by the US biotech firm Regeneron Pharmaceuticals, and dexamethasone, a steroid that some medical experts warn can cause insomnia and mood swings.

Despite continued confusion about the Trump’s condition, the president’s physician, Dr. Sean Conley, said he anticipates Trump would be able to safely return to public engagements on Saturday.

Pelosi said: ‘I’ve quoted others to say that there are those who say that when you’re on steroids and/or if you’ve had Covid-19 or both – that there may be some impairment of judgment. But, again, that’s for the doctors and scientists to determine, but it was very strange, really surprising.”

Trump has issued video messages and dozens of tweets that, even by the standards of his mercurial presidency, have spun in all directions and sown disarray.

This week he abruptly announced that he was calling off the talks with Pelosi over additional coronavirus economic relief legislation, catching Republicans by surprise, only to later partly reverse his position. On Thursday he also suddenly declared that he would not take part in next week’s debate with Joe Biden after it was announced on Thursday morning that the event would be virtual, not in-person.

And the president has returned to the Oval Office despite isolation rules that should have kept him away and the White House itself becoming a virus hotspot. At least 20 people in or working around the executive mansion have tested positive for Covid-19 in recent days.

In Trump’s hour-long interview with Fox Business on Thursday, observers found further cause for concern. He mused that he could have contracted the virus from a reception he held for military families at the White House. “They want to hug me and they want to kiss me,” he said. “And they do and, frankly, I’m not telling them to back up.”

He claimed that his hospitalization was unnecessary. “I didn’t have to go in, frankly; I think it would have gone away by itself.” And he made the false assertion: “I don’t think I am contagious at all. Remember this: when you catch it you get better. And then you’re immune.”

This was after he emerged from hospital announcing that people should not fear Covid-19, despite the fact it has already killed 212,000 people in America and caused many others among the 7.6 million infected in the US to suffer serious and sometimes prolonged symptoms.

And reacting to Wednesday’s vice-presidential debate, he called the Democratic senator Kamala Harris of California a “communist” and “monster” who wants to “open up the borders to allow killers and murderers and rapists to pour into our country”.

Earlier on Wednesday, the president tweeted a video of himself describing his contraction of the virus as a “blessing from God”.

Under the 25th amendment, Pence would take over if Trump were deemed unfit to serve, with Pelosi next in line. Pence reported on Thursday that he had tested negative for coronavirus.