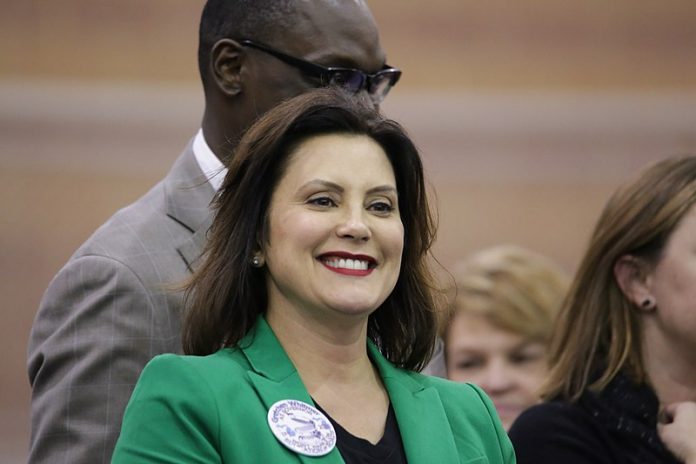 Michigan Republican Senate candidate John James received campaign contributions and was photographed with the organizer of the rally where conspirators accused of planning to kidnap Michigan Gov. Gretchen Whitmer allegedly plotted with a militia to recruit more members.

James, along with Vice President Mike Pence, was photographed with Ryan D. Kelley, a Grand Rapids real estate agent who heads the American Patriot Council, in since-deleted social media images reviewed by Salon. President Donald Trump was also pictured with Kelley in a photo posted to his Facebook profile.

Kelley was the organizer of the “Well-Regulated Militia” rally at the Michigan capitol in June. The FBI alleged in court documents that the leader of the group who plotted the attack on Whitmer met with militia leader Ty Garbin and a confidential source at the rally to discuss a plan and recruit more members.

Kelley’s pro-gun rally drew “dozens of armed members from various militias, most of them white,” to the state capitol where they met with “other fringe groups like Boogaloo Bois and Proud Boys,” according to Bridge Michigan.

The FBI alleged that the rally was among the locations where members plotted to kidnap Whitmer, try her in a remote location in Wisconsin, and execute her for “treason” after complaining that the state’s coronavirus lockdown had shuttered gyms. The FBI charged 13 men, including members of the Wolverine Watchmen militia, in the alleged plot last week.

Kelley disputed a link between the rally and the plot, noting that one of the suspects was a Black Lives Matter supporter and another suspect posted an anti-Trump video.

“The June APC Rally was pro-law enforcement,” he said in a statement to Salon. “We coordinated the entire rally with Michigan State Police [and] thanked them publicly for their service. To suggest our rally was a meeting place to discuss a plot against the [governor] is grossly inaccurate.”

James’ campaign did not respond to questions, but it sent over a statement the Republican previously made to reporters.

“That was insane. That’s like the most 2020 headline I’ve seen this week,” he told reporters after the news broke. “Under no circumstances should we have this at all. I condemn any domestic terrorism, and I hate it in all its forms. I swore an oath to defend the Constitution against all enemies foreign and domestic, and the individuals implicated in this should be prosecuted to the fullest extent.”

“I took an oath to defend the Constitution and this nation against enemies foreign and DOMESTIC,” the Army veteran added on Twitter. “Those who threatened our State must be prosecuted to the fullest.”

Trump, who called to “liberate Michigan” in April and has been accused of emboldening militias, came under fire last month after he refused to denounce the Proud Boys and white supremacists in the first presidential debate. He also tweeted in support of protesters who stormed the Michigan capitol, some of whom were armed with guns, to condemn the state’s coronavirus restrictions.

Trump’s son Eric scrapped a campaign appearance on Monday at a Michigan gun shop where one of the plot suspects previously worked.

James, who has billed himself as a unity candidate, has also echoed the rhetoric from far-right Michigan groups who have criticized Whitmer’s coronavirus restrictions, railing against “socialism” and suggesting that Whitmer was a dictator at recent campaign stops. His campaign stops have drawn members of the Proud Boys, which the FBI has classified as an “extremist group with ties to white nationalism.” James has also campaigned with NRA board member Ted Nugent, who has repeatedly espoused support for the militia movement.

Whitmer linked Republican rhetoric to the alleged plot against her over the weekend.

“I do believe that there are still serious threats that groups like this group — these domestic terrorists — are finding comfort and support in the rhetoric coming out of Republican leadership from the White House to our state House,” she told CBS News. “And so I remain concerned about safety and integrity going up to this election.”

The American Patriot Council denounced the alleged plot after the FBI announced the arrests.

“The American Patriot Council in no way condones violence as a form of political action. As the public is well aware, any actions taken by the American Patriot Council have been legal and lawful,” the group said in a statement. “While we hold the view that many public officials are guilty of a litany of crimes, and it has been our goal to hold these officials criminally responsible, we must do so lawfully.”

“The American Patriot Council believes in law and order across the board and that no American citizen should be deprived of their right to due process of law,” the statement added. “We have no affiliation with any other groups, nor will we aid or abet anyone using threats or acts of violence. Please take note that we are on the side of law enforcement. To this point, we have not been made aware of any plans of violence, and we believe our members and followers to be patriots.”

Trump, meanwhile, attacked Whitmer over the coronavirus restrictions after the arrests were announced. He also demanded that she thank him.

“Rather than say thank you,” Trump tweeted, “she calls me a White Supremacist.”