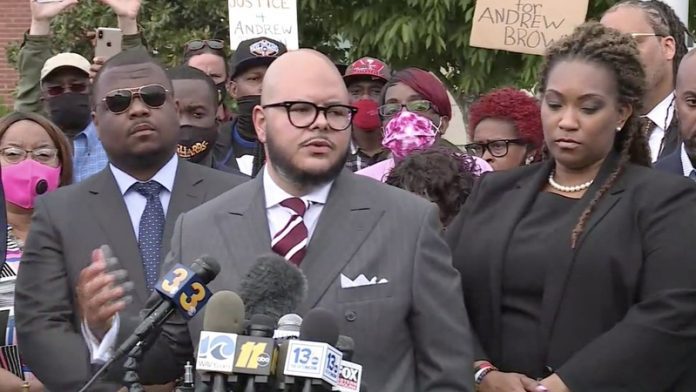 Lawyers for the family of Andrew Brown Jr., a Black man who was killed by deputies, said Tuesday, May 11, 2021, that body camera videos show that he did not hit them with his car before they shot at him, contradicting the statements given by the prosecution.

Brown family lawyer, Chance Lynch, viewed the footage with members of the Brown Jr. family. He stated that Brown Jr. was sitting in his car which was not moving, his hands firmly on the steering wheel prior to shots being fired.

Previously, the family was permitted to view 20 seconds of the video. Under orders by a judge, they were able to see 18 minutes more footage from various cameras.

Lawyers for the family stated the footage that they viewed goes against the statements made by the district attorney who stated the deputies did not fire at Brown Jr. until he hit them twice with a car.

Lynch’s description of the events which took place is similar to the one said by another attorney for the family who viewed the shorter portion of the video.

Speaking to reporters, Lynch stated, “We did not see any actions on Mr. Brown’s part where he made contact with them or tried to go in their direction.” Continuing, he said: “In fact, he did just the opposite. While there was a group of law enforcement that was in front of him, he went the opposite direction.”

Lynch, who previously called the victim’s shooting “unjustified” and “unconstitutional,” said the bodycam footage revealed Brown Jr. did not have any weapons.

On April 21, 2021, Brown Jr. was sitting in his car outside of his home in Elizabeth City, North Carolina when he was shot and killed by police who were serving him with a warrant, which accused him of drug possession with the intent to sell.

Residents protested demanding the release of body camera footage, which was refused.

District Attorney Andrew Womble said in an April court hearing to discuss the release of the video that Brown Jr. backed up hitting a law enforcer, came to a stop and started moving again.

Womble added that officers shouted commands to Brown Jr and before they fired shots tried to open the door of his car.

On Tuesday, Lynch admitted that it was possible before Brown Jr. tried to drive away, the officers may have touched the car door. Adding Brown Jr. did not initiate contact.

No deputies were injured during the incident.

Governor Roy Cooper and Brown Jr. lawyers have asked for a special prosecutor to take over the case.

An independent autopsy ordered by the family of the victim concluded he was shot for times including a fatal shot to the back of the head.

The state’s autopsy has not been released.

Judge Jefferey Foster declined to release the video to the public for at least 30 days. However, he agreed to show the family less than 20 minutes of the two-hour video which would be heavily redacted from dashboard and body cams.

Foster said he would consider releasing the video to the public after a 30 day period in order to give an independent state investigation to conclude.

The FBI has launched a probe to see if Brown Jr. had his civil rights violated. The three deputies involved in the shooting remain on leave pending the outcome of the investigation. 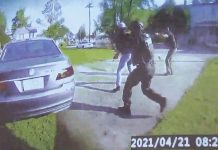