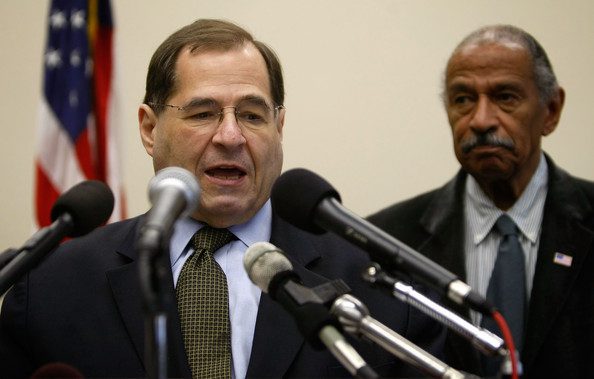 Jerry Nadler delivered the following opening statement on July 24, 2019, at the oversight hearing with Robert Mueller, the former special counsel.

“Director Mueller, thank you for being here. I want to say just a few words about our themes today: responsibility, integrity, and accountability.

Your career, for example, is a model of responsibility.

You are a decorated Marine officer. You were awarded a Purple Heart and the Bronze Star for valor in Vietnam. You served in senior roles at the Department of Justice and, in the immediate aftermath of 9/11, you served as Director of the FBI.

Two years ago, you returned to public service to lead the investigation into Russian interference in the 2016 election.

You conducted that investigation with remarkable integrity.

For 22 months, you never commented in public about your work—even when you were subjected to repeated and grossly unfair personal attacks. Instead, your indictments spoke for you, and in astonishing detail.

Over the course of your investigation, you obtained criminal indictments against 37 people and entities.

You secured the convictions of President Trump’s campaign chairman, his deputy campaign manager, his national security advisor, and his personal lawyer, among others.

In the Paul Manafort case alone, you recovered as much as $42 million—so that the cost of your investigation to the taxpayers approaches zero.

And, in your report, you offer the country accountability as well.”