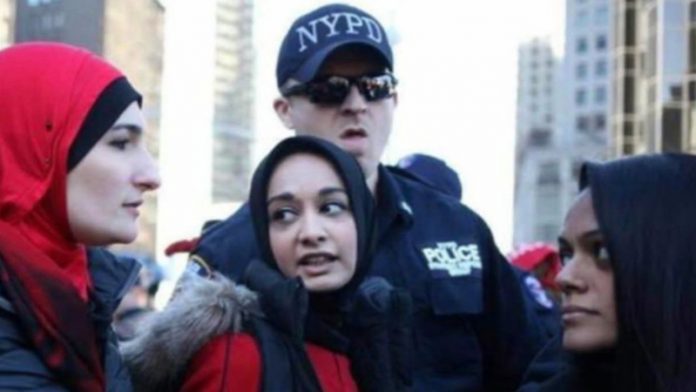 Sarsour, 41, has for years been a deeply polarizing figure in city politics, where critics frequently accuse her of anti-Semitism.

“I understand why Andrew Yang hired her; trying to project yourself as a progressive,” Mark Meyer Appel, founder of The Bridge Multicultural Advocacy Project, told The Post. Appel, a supporter of Yang opponent Eric Adams, said Ahuja has been “hanging out with some real trouble makers.”

Polling suggests Yang is the undisputed frontrunner in the race for City Hall. Ahuja, 33, was recently promoted to the leadership of Yang’s campaign, named a co-campaign manager earlier this month along with Chris Coffey, a bruiser consultant from Tusk Strategies.

Much of Ahuja’s association with lightning-rod Sarsour has been documented on social media. On March 8, 2017, the pair were arrested together during a protest outside Trump International Hotel & Tower in Manhattan.

“We get arrested in civil disobedience (unplanned 🙈) on International Women’s Day during the #DayWithoutWoman noon event organized by the Women’s March,” Sarsour said in a Facebook post documenting the moment, and sharing a photo of her, Ahuja, and fellow activist Faiza Ali being arrested.

Ahuja has gushed about her controversial mentor.

“What they don’t realize is that @lsarsour has raised a generation of activists. She paved the way for all of us. When they come for her, they come for all of us. Not on our watch. NOPE. We love you and stand with you always, Linda! #StandWithLinda,” she said in one tweet from Aug. 2020.

“Linda Sarsour is a freedom fighter and she taught us how to fight #istandwithlinda,” she said in another. “Linda Sarsour is my shero. The end. #phenomenalwoman” Ahuja added in yet a third-social media homily to the activist.

Before Yang, Ahuja spent her time in more progressive circles and appears more philosophically aligned with his opponent Maya Wiley — to whom she donated $250 in Aug 2020 (before Yang entered the race).In 2019 Ahuja offered a tweet sympathetic to Kimberly Watkins — who accused Yang of firing her when she worked at his company Manhattan Prep because she was married. Yang denied the allegation.

Sarsour and her Women’s March were closely aligned to hate boss and Nation of Islam leader Louis Farrakhan. Sarsour herself delivered a passionate speech at his #JusticeOrElse march in Washington D.C in 2015. She has also publicly praised Palestinian terrorist Rasmea Odeh, who was convicted in 1970 for participating in the bombing of a Jerusalem supermarket which left two dead.

Sarsour has frequently lauded the benefits of Sharia Law and supports the Boycott Divestment and Sanctions movement against Israel.

“Her views have no place in our political discourse and any candidate who associates with her is guilty of handing a megaphone to anti-Semites around the country,” Ronald Lauder, a Republican and President of the World Jewish Congress, told The Post in September after Sarsour was named an official surrogate of Sen. Bernie Sanders’ presidential campaign.

Sarsour did not respond to a request for comment but does not appear to have made an endorsement in the race. A review of her social media suggests she is personally friendlier with Eric Adams — who she backed in his campaign for Brooklyn Borough President in 2013.

Yang has made a concerted effort to court the city’s Jewish voters. He’s come out hard in favor of Israel and against BDS, and voiced support for greater autonomy among the city’s religious Yeshiva schools. On Thursday he named David Schwartz, a Brooklyn district leader, as his “Jewish Community Outreach Director.”

“Andrew and I have been outspoken in our support for Israel and equally outspoken in our opposition to BDS, which singles out Israel, the world’s only Jewish state, for delegitimization. The private relationships of campaign staffers have no bearing on the clearly stated policy positions of Yang for New York. We unequivocally reject BDS —always have and always will,” campaign co-chair Congressman Ritchie Torres told The Post.

Reps for the campaign refused to say what role — if any — Sarsour might play in a future Yang administration.