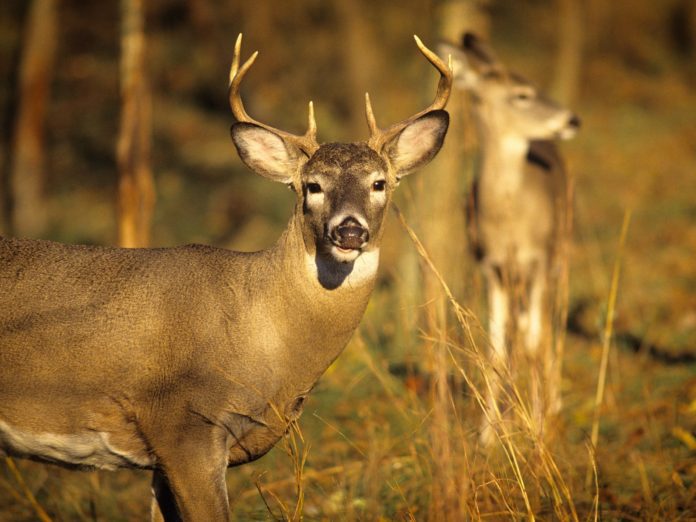 White-tailed deer, a species found in every U.S. state except Alaska, appear to be contracting the coronavirus in the wild, according to the first study to search for evidence of an outbreak in wild deer.

Researchers with the U.S. Department of Agriculture (USDA) analyzed blood samples from more than 600 deer in Michigan, Illinois, New York, and Pennsylvania over the past decade, and they discovered that 40 percent of the 152 wild deer tested from January through March 2021 had antibodies to SARS-CoV-2, the virus that causes COVID-19. Another three deer from January 2020 also had antibodies.

Their presence means that deer likely had encountered the virus and then fought it off. The animals didn’t appear sick, so they probably had asymptomatic infections, the agency says. Roughly 30 million white-tailed deer live in the U.S.

“The risk of animals spreading SARS-CoV-2 to people is considered low,” the USDA told National Geographic in a statement. Still, the results may suggest that “a secondary reservoir for SARS-CoV-2 has been established in wildlife in the U.S.” says Jüergen Richt, a veterinarian and director of the Center on Emerging and Zoonotic Infectious Diseases at Kansas State University who was not involved in the USDA’s work. If the virus is circulating in other species, it could continue to evolve, perhaps in ways that make it more severe or transmissible, undermining efforts to slow the pandemic. Earlier this year, researchers established that deer are susceptible to the virus when infected in the lab—and that they can pass the virus to each other. But scientists didn’t know until now if infections were occurring in nature. The only species with lab results indicating that they had contracted the virus in the wild had been mink, though cats, dogs, otters, lions, tigers, snow leopards, gorillas, and a cougar have all had outbreaks in captivity or in zoos. (Learn more about efforts to vaccinate some of these animals.)

The new USDA report was posted on a preprint website, which means it hasn’t yet been peer-reviewed. The Centers for Disease Control and Prevention didn’t respond to a request for comment.

“At present, there’s no evidence that SARS-CoV-2 is having any detrimental effect on deer. And for humans, our infinitely greater problem is spread from other humans,” says Daniel Bausch, a Switzerland-based zoonotic diseases expert and the director of emerging threats and global health security at the nonprofit FIND, which works to develop tests for poverty-related diseases.

The USDA says the risk to people who hunt white-tailed deer is not high. Though researchers posit the virus may have originally jumped from animal to human at a wet market in China, where wild animals were slaughtered and sold for food, differences in food preparation procedures matter.

There’s “no evidence that you can get COVID-19 by eating [contaminated] food, including wild hunted game meat,” the USDA says. The department is not issuing new guidance, pointing instead to existing government recommendations on good hygiene when processing animals, which include properly cooking and storing meat, and cleaning and disinfecting all knives, surfaces, and equipment.

Exactly how deer may have been exposed to the virus remains uncertain, though researchers suspect they were infected by humans. “Multiple activities could bring deer into contact with people, including captive cervid operations, field research, conservation work, wildlife tourism, wildlife rehabilitation, supplemental feeding, and hunting,” the USDA researchers wrote. Other possibilities include that they contracted it through contaminated wastewater or from exposure to other infected species like mink.

Researchers also don’t know if the deer are passing the virus among themselves or to other species.

There’s a chance that the deer didn’t have SARS-CoV-2 at all, Bausch says; another explanation is that the USDA’s tests detected antibodies for other coronaviruses, a phenomenon known as cross-reactivity.

The USDA says that’s unlikely. Researchers used a commercially available SARS-CoV-2 antibody screening test that has been highly accurate with other species. The USDA also helped rule out the chances of cross-reactivity by testing a subset of the samples using a second type of antibody test even more specific to SARS-CoV-2. That second test’s results mirrored the earlier findings, suggesting that the tests were truly picking up SARS-CoV-2 antibodies, the USDA told National Geographic in a statement.

Pre-pandemic blood samples from deer also shore up the results: If the tests were just detecting antibodies for other coronaviruses, antibody levels in deer likely would be similar in samples taken both before and during the pandemic. Yet when the researchers tested 239 samples collected before January 2020 from a slightly wider pool that also included deer from New Jersey, they had only one positive test—from 2019. (The USDA says that the single outlier was almost certainly a false positive since it had a very low level of antibodies. Richt says that the USDA’s false-positive conclusion sounds reasonable.)

Bausch says that performing the two types of tests gives him greater confidence in the results. Still, it’s always possible that cross-reactivity is an issue. “There are many coronaviruses that circulate in animals and likely many that we’ve yet to discover,” he says. The most definitive ways to rule out cross-reactivity, he says, would be to isolate a virus on cell culture—perhaps by testing respiratory secretions from deer—but that would require finding a deer when it had an active coronavirus infection.

Exposure to the virus seemed to vary widely by location, the researchers found. Of the four states, Michigan had the largest percentage of deer with SARS-CoV-2 antibodies—67 percent. That was followed by Pennsylvania with 44 percent, New York with 31 percent, and Illinois with 7 percent of samples showing antibodies. The deer with coronavirus antibodies were also concentrated in specific counties, the USDA writes, “with nearly half of the 32 counties sampled showing no evidence” of coronavirus exposure, the study says.

“These results emphasize the need for continued and expanded wildlife surveillance to determine the significance of SARS-CoV-2 in free-ranging deer,” the USDA says. Now, the researchers wrote, it’s also important to look for the virus in predators and scavengers that may eat deer.