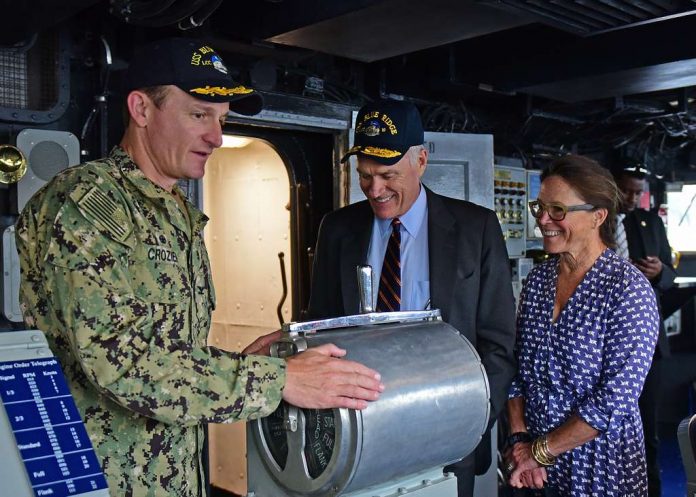 Captain Brett Crozier, the officer who was relieved of command of the aircraft carrier USS Theodore Roosevelt after a letter warning of a coronavirus outbreak onboard the ship leaked to the press, has tested positive for COVID-19.
Two Naval Academy classmates of Crozier who remain close to the family revealed the diagnosis to The New York Times on Sunday, April 5, 2020.

Two Naval Academy classmates of Crozier who remain close to the family revealed the diagnosis to The New York Times on Sunday.

The classmates told the Times that Crozier began to show symptoms of the disease before he was dismissed by Acting Navy Secretary Thomas Modly on Thursday.

News of Crozier’s diagnosis comes on the heels of a report claiming that the top US military commander and the most senior naval officer were reportedly opposed to Crozier’s dismissal but were overruled by the Trump administration.

General Mark Milley, the chairman of the Joint Chiefs of Staff, and Admiral Michael Gilday, the chief of naval operations, believed that the Navy should have allowed an investigation into the letter written by Crozier to run its course.

Defense Secretary Mark Esper initially sided with the officers, according to The Washington Post.

But Esper eventually yielded to Acting Navy Secretary Thomas Modly, who favored immediately dismissing Crozier because he believed that is what President Trump wanted.

Crozier was fired four days after he penned a scathing letter to Navy leaders calling for stronger action to address the COVID-19 outbreak he said was threatening his sailors’ lives.

The captain is believed to have sent the letter to several people knowing that it stood a good chance of being leaked to the press.

Modly, who made the decision on Thursday to relieve Crozier of command of the Roosevelt, reportedly told colleagues that Trump ‘wants him fired.’

The acting secretary was reportedly told by Gilday as well as several current and former colleagues that it would be best to allow the military to handle the situation in-house without interference from the civilian leadership.

When Modly said he wanted Crozier dismissed, Esper reportedly told him: ‘I’ll do what you want.’

Esper on Sunday defended Modly’s decision to fire Crozier, who has emerged as a sympathetic figure in the eyes of his former sailors as well as a segment of the public who believes he was unjustly punished for looking out for the health of his charges.

‘I think acting Secretary Modly made a very tough decision – a decision that I support,’ Esper told CNN on Sunday.

‘It’s just another example (of) how we hold leaders accountable for their actions.’

Esper was asked if the Trump administration moved too quickly to fire Crozier instead of allowing the military to complete its probe into the matter.

The defense secretary replied that it was ‘not unheard of’ for the Navy to fire a senior officer before an internal investigation is complete.

‘All the services at times relieve commanders without the benefit of an investigation upfront because they have lost confidence in them,’ Esper said.

‘It’s certainly not unique to the Navy.

‘The Navy has a culture of swiftly and decisively removing captains if they lose confidence in them.’

During a coronavirus task force press conference Saturday afternoon, Trump said that the four-page letter was ‘inappropriate’ adding that this wasn’t a ‘class on literature’.

It was Navy leaders who made the decision to fire the captain but Trump said he agreed that it was the right thing to do after Crozier’s call for help for his sailors became public.

‘He wrote a letter. A five-page letter from a captain. And the letter was all over the place. That’s not appropriate, I don’t think that’s appropriate,’ Trump said.

‘It looked terrible what he did. To write a letter. I mean this isn’t a class on literature. This is the captain of a massive ship … he shouldn’t be talking that way in a letter.’

Trump also chided Crozier for allowing sailors to be infected in the first place, claiming that he should not have allowed them to go to land during a stop to Vietnam at the beginning of March.

The president said that this was not a smart move when there was a pandemic that could have spread to the ship.

At the same time as the stop-off, Trump himself was dismissing the severity of the global outbreak and believed it would not pose a massive threat to Americans.

In defending his decision on Friday, Modly said America’s enemies might think the aircraft carrier was ‘crippled’ after Crozier’s letter was leaked.

Modly and others in the Trump administration have been on the defensive in explaining the firing after videos emerged of Crozier being given a rowdy farewell by his crew who were chanting his name as he left the warship.

Modly, who served in the US Navy as a helicopter pilot before becoming a managing director at consultants PwC, was publicly backed on Friday by Esper and Milley.

Milley said if the Navy secretary had lost trust in Crozier, ‘Then that’s it. It’s target down and we’re moving on to the next task’.

Admiral Mike Mullen, who served as chairman of the joint chiefs of staff from 2007 until 2011, disagreed with the decision.

‘I think the firing was a really bad decision, because it undermines the authority of the military commanders who are trying to take care of their troops, and significantly negatively impacts the willingness of commanders to speak truth to power,’ he told the Post.

Modly was also backed by Rear Admiral John Menoni, the region’s US Navy commander, who disagreed with Crozier’s assertion that all but 10 percent of the ship’s crew could be removed from the vessel if necessary.

The Navy announced on Saturday that 44 per cent of the crew of the USS Theodore Roosevelt had been tested for the coronavirus, and 155 service members had tested positive.

About 1,548 service members had been moved onshore. None had been hospitalized.

The mother of a coronavirus-stricken sailor from the USS Theodore Roosevelt says she fears for her daughter’s health as thousands of crew from the aircraft carrier are transferred to dry land.

Margalis Fjelstad’s daughter is one of the 155 crew who have tested positive for COVID-19 on board the ship, which is currently docked at US Navel Base Guam.

‘She’s feeling exhausted, she sleeps most of the day, and a lot of times she’s up and down at night,’ Fjelstad told The Washington Post of her daughter’s condition Saturday.

‘Her temperature is spiking, then coming down and going up again. Tuesday and Wednesday, we weren’t able to talk on the phone because she couldn’t talk and breathe at the same time’.

Fjelstad stated that her daughter was removed from the Roosevelt earlier this week following confirmation that she had contracted COVID-19.

She is now quarantined with other female sailors who are also displaying symptoms of the highly contagious virus.

Some 2,700 sailors are expected to be removed from the Roosevelt by the weekend as officials scrambled to secure enough hotel rooms to house them near US Naval Base Guam.

Local islanders, meanwhile, are unhappy about plans to house troops possibly infected with coronavirus in hotels.

‘If sailors are placed in our hotels, we will be exposing lower-wage employees to greater risk, many of whom are older and have limited or no health benefits for themselves and their families.’

Modly became acting secretary in November after Richard Spencer was sacked because wanted to demote and strip shamed Navy Seal Eddie Gallagher of his Trident pin – against President Trump’s wishes.

When he was at PwC, Modley earned at least $700,000 a year and helped the firm profit from Nato contracts and the rebuilding of Iraq and Afghanistan.

Modly said on Friday: ‘One of the first things I learned as a midshipman was this phrase that I think became popular in World War II, which is loose lips sink ships.

‘I had wished that I would never have to make a decision like this, but my responsibilities extend beyond just that individual officer.

‘And they go to the safety of that crew, our national security objectives, all the other ships that are out there in the Pacific that are now perhaps on higher standard of alert because our adversaries in the region think that one of our warships might be crippled, which it’s not.’

The sources claim Modly was encouraged to ‘call us any time day or night’ if he had any concerns.

Modly said: ‘I just can’t have a commanding officer who gets overwhelmed and uses that type of judgment in the middle of a crisis.

‘And this is not an indictment of his entire career. He’s had an absolutely incredible career. I’m envious of it. He’s done some amazing things.

‘But at this particular time, I needed a CO there that could help manage us through this crisis. And I just didn’t think based on those actions that I could do that.’

Modly said that Crozier ‘put the spotlight on the Navy in a negative light when all the things he was asking for we’re surging for him.’

The acting secretary said that it was ‘sort of most disappointing’ to him that the letter from Crozier leaked to the press after he had ‘set up a direct line’ to the captain.

Crozier should’ve gone to Modly directly ‘if he felt anything wasn’t going well and he needed help.

But the Navy’s claims are being treated with skepticism by at least one parent of a sailor onboard the Roosevelt, who told Foreign Policy that hundreds of troops were being quarantined and checked for high temperatures and that the military was not doing enough to keep them safe at the time the letter was sent.

‘It felt like a lot of politics to me and not enough action,’ the mother of a Roosevelt sailor told Foreign Policy.

‘I believe that the Crozier memo expedited the whole thing.’

The mother added: ‘When I hear the secretary of the Navy say that [the captain] made a bad judgment call I don’t necessarily agree.

‘This was not a man who made bad judgment calls.’

‘And that, to me, just represented just extremely poor judgment, because once you do that in this digital era, you know that there is no way that you can control where that information’s going to go.’

Crozier on Thursday was given a rousing salute by his now-former crew as he left the aircraft carrier for the last time after being fired.

The nuclear-powered aircraft carrier docked in the Pacific island of Guam, where hundreds of sailors suspected of being exposed to the coronavirus will be quarantined in several hotels.

Former Vice President Joe Biden, a Democrat who is seeking to challenge President Donald Trump in the November presidential election, on Sunday called the Trump administration’s firing of the commander ‘close to criminal.’

‘The idea that this man stood up and he said what had to be said, got it out that … his Navy personnel were in danger … I think the guy, he should have a commendation rather than be fired,’ Biden told ABC News in a separate interview.

A group of Democratic senators has also called on the Pentagon’s independent Inspector General to investigate the dismissal.