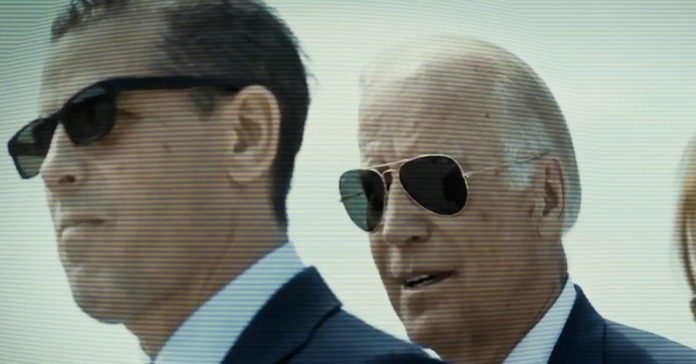 A new ad for President Donald Trump’s 2020 reelection campaign released on September 27, 2019 is being denounced for including a totally “fabricated” lie about former Vice-President Joe Biden and comes days after House Democrats launched an official impeachment inquiry into Trump regarding his exchange with Ukraine’s President Volodymyr Zelensky earlier in 2019 and allegations the White House covered it up to avoid the truth from being brought to the public.

Sen. Chris Murphy (D-Conn.) Posted online on September 27 on his Twitter which he pinned to the top of his page “The allegation in this ad is made up. Fabricated. The prosecutor Biden wanted to be fired WAS NOT investigating Burisma (the firm Hunter was on the board of), and EVERYONE wanted the prosecutor fired because he was corrupt and incompetent.”

Trump’s video is an ad—which flagrantly mischaracterizes a story about Biden, his son Hunter, and Ukraine from 2015—while stating, “I am draining the swamp.”

Tim Murtaugh, director of communications for Trump’s 2020 campaign, states the video is part of a new $10 million ad buy, including $2 million donated by the Republican National Committee.

At the final moments of the ad, one can hear Trump’s voice saying: “I’m Donald Trump, and I approved this message.”

The false claims against Biden and his son are based on unfounded conspiracy theories. Trump’s insistence on spreading them—given all the available documentation and reporting—appears like willful deceit on the part of his reelection campaign.

Those who know the truth started to call it out.

Journalist Judd Legum tweeted “Not positive. But I think this is the world’s first political ad that brags about committing an impeachable offense.”

James Risen was one of the journalists who have rebuffed the right-wing narrative about the Biden-Ukraine story is investigative. Previously working for the New York Times and now employed by The Intercept, in 2015 was one of the first to report the story involving Biden, the work of his son Hunter Biden, and a Ukraine gas company.

“It’s strange to see my journalism twisted, perverted and turned into lies and poisonous propaganda by Donald Trump, Rudy Giuliani, and their enablers,” Risen wrote in his column on September 26. “But that’s what has happened to a news story I wrote four years ago.”

Risen’s 2015 story was entitled “Joe Biden, His Son and the Case Against a Ukrainian Oligarch.” Risen wrote on September 26 that even while contemporary observers of the alleged “Ukraine scandal” involving the Bidens “seem to think this suddenly hot story came out of nowhere this year,” that is simply not accurate. According to Risen:

“The truth behind that story has been lost in a swamp of right-wing opposition research, White House lies, and bizarre follow-up stories. Now it appears that the Biden-Ukraine story will play a role in a new impeachment inquiry against Trump, amid evidence that he sought to pressure Ukrainian President Volodymyr Zelensky by withholding U.S. aid unless Zelensky agreed to investigate the Bidens.”

Risen states, “When Joe Biden went to Ukraine, he was not trying to protect his son — quite the reverse.” He continued:

“The then-vice president issued his demands for greater anti-corruption measures by the Ukrainian government despite the possibility that those demands would increase – not lessen — the chances that Hunter Biden and Burisma would face legal trouble in Ukraine.

When it first was published, my 2015 story seemed to have little impact, other than to irritate Joe Biden and his staff. It ran inside the print edition of the Times, not on the front page.

However, somebody obviously read my piece, as well as others like it, because questions about the Bidens in Ukraine suddenly came roaring back this year. Giuliani, Trump, and their lackeys began spreading the false accusation that Biden had traveled to Ukraine to blackmail the government and force officials into firing the country’s chief prosecutor, Viktor Shokin, to derail an investigation into Burisma.”

Risen concluded in his “Biden did threaten to withhold $1 billion in U.S. loan guarantees unless Shokin was ousted,” he explained. “But that was because Shokin had blocked serious anti-corruption investigations, not because he was investigating Burisma.”