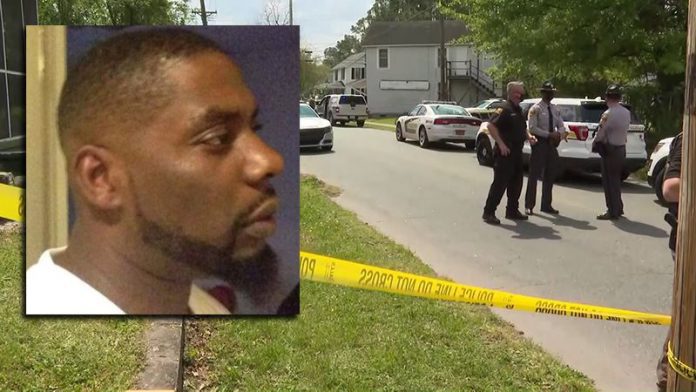 For a second night in a row, more than 100 community members peacefully protested throughout the streets of Elizabeth City in the wake of Andrew Brown’s shooting death.

“I just want justice and peace all over the world,” said Kayla Parker, a protester. “It’s crazy how just in our little small town that this would happen. I never would have thought we would be here, but we are.”

The protesters are demanding for the release of the body camera footage that was taken when Brown was shot by a deputy serving a search warrant on April 21 in Elizabeth City.

According to the Pasquotank County Sheriff’s Office, a search warrant was conducted in the 400 block of Perry Street at around 8:30 a.m. Wednesday A deputy shot and fatally wounded the resident while serving the search warrant, officials said. That resident was later identified as Brown.

“He wasn’t trying to harm police,” Parker said. “He was just trying to flee.”

The demonstrators are hoping the body cam footage will show the events leading up to the shooting.

Rayna Carver, 13, said these killings of Black and brown people at the hands of law enforcement are becoming all too familiar.

“It keeps happening,” Carver said as she was marching. “That’s all I thought is, ‘Here we go again,’ and it’s not fair and even though this might not help, at least it’ll get a point across.”

As Brown’s family grapples with his loss, others are hoping their message resonates with law enforcement so this doesn’t happen again.

“It shouldn’t take somebody dying for somebody to realize this isn’t fair,” Carver said. “I’m 13 years old and I’m here scared for my life because of the color of my skin.”

The Pasquotank Co. chapter of the NAACP, local city officials and the Brown family attorney spoke after meeting with the district attorney on Thursday. They are also calling for the release of the body camera footage as well as a chance to speak to the sheriff.

District Attorney Andrew Womble and Pasquotank County Attorney R. Michael Cox released a joint statement saying that the body camera footage cannot be released at this time due to North Carolina law, but the attorneys are working to arrange a private viewing of the footage by Brown’s family.

“We know people want to see the body camera footage. It is reasonable for people to ask to see it, because such video can help provide key context about what happened in incidents like this,” the statement read. “However, under North Carolina law, police body worn camera footage is not a public record and cannot be released to the press or public without a court order. The UNC School of Government has an article describing this further. We must follow the law and the law prohibits us from publicly releasing the body worn camera footage. The law does allow a private viewing by the family of Mr. Brown, and we are working with their attorney to arrange that.”
District Attorney Andrew Womble and Pasquotank County Attorney R. Michael Cox
On Wednesday night, Elizabeth City City Council members met to talk about what happened to Brown. As the meeting went on inside, outside people gathered reacting to the incident and demanding answers and transparency.

The protest began around 5:30 p.m. at Colonial Avenue and Martin Luther King Jr. Drive. City officials said it will likely hinder traffic into and out of Camden and advised people in the area to plan accordingly.

Sheriff Wooten and Chief Deputy Daniel Fogg released a video statement Thursday, saying Brown’s death was tragic and offering their condolences to his family. They added that some deputies have been receiving threats in the wake of the incident, and while they “respect and support peaceful protests and will provide protection to protesters,” they’re reminding people that threats are illegal and “not a solution.”

In the statement, they said Brown’s warrant was for felony drug charges and added that he “was a convicted felon with a history of resisting arrest.”

Wooten said the North Carolina State Bureau of Investigation has the body camera footage of the shooting, but it can only be released by a judge.

Fogg said “the issue will come from whether our deputies had reason to believe Brown’s actions put them at risk of serious injury or death” and added that they won’t state their opinion about this because they “don’t have all the facts.”

The sheriff said should evidence show the deputies violated the law or the sheriff’s office’s policies during this incident, “they will be held accountable because that’s what the citizens expect me to do and it’s the right thing to do.”

The SBI is handling the investigation.

The sheriff is not releasing the names of the deputies involved in the shooting, but during his video message Thursday, April 22, 2021, he said they’ve been put on administrative leave until all the facts are gathered.