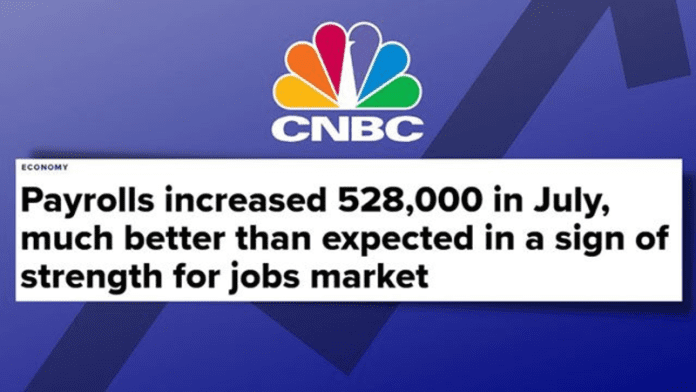 Hiring in July was far better than expected, defying multiple other signs that the economic recovery is losing steam, the Bureau of Labor Statistics reported Friday.

Nonfarm payrolls rose 528,000 for the month, and the unemployment rate was 3.5%, easily topping the Dow Jones estimates of 258,000 and 3.6%, respectively. The unemployment rate is now back to its pre-pandemic level and tied for the lowest since 1969, though the rate for Blacks rose 0.2 percentage points to 6%.

Wage growth also rose, as average hourly earnings jumped 0.5% for the month and 5.2% from the same time a year ago. Those numbers add fuel to an inflation picture that already has consumer prices rising at their fastest rate since the early 1980s. The Dow Jones estimate was for a 0.3% monthly gain and 4.9% annual increase.

More broadly, the report showed the labor market remains strong despite other signs of economic weakness.

“There’s no way to take the other side of this. There’s not a lot of, ‘Yeah, but,’ other than it’s not positive from a market or Fed perspective,” said Liz Ann Sonders, chief investment strategist at Charles Schwab. “For the economy, this is good news.”

Markets initially reacted negatively to the report, with the Dow Jones Industrial Average down 128 points in early action as traders anticipated a strong counter move from a Federal Reserve looking to cool the economy, particularly a heated labor market.

Leisure and hospitality led the way in job gains with 96,000, though the industry is still 1.2 million workers shy of its pre-pandemic level.

Professional and business services was next with 89,000. Health care added 70,000, and government payrolls grew by 57,000. Goods-producing industries also posted solid gains, with construction up 32,000 and manufacturing adding 30,000.

Retail jobs increased by 22,000, despite repeated warnings from Walmart, Target, and elsewhere executives that consumer demand is shifting.

A more encompassing view of unemployment, including those holding part-time jobs for economic reasons and discouraged workers not looking for jobs, was unchanged at 6.7%.

Back to pre-pandemic
Despite downbeat expectations, the July gains were the best since February and well ahead of the 388,000 average job rise over the past four months. The BLS release noted that total nonfarm payroll employment has increased by 22 million since the April 2020 low when most of the U.S. economy shut down to deal with the Covid pandemic.

“The report throws cold water on a significant cooling in labor demand, but it’s a good sign for the broader U.S. economy and worker,” Bank of America economist Michael Gapen said in a client note.

The BLS noted that private sector payrolls are now higher than the February 2020 level, just before the pandemic declaration, though government jobs are still lagging.

The unemployment rate ticked down, resulting in both strong job creation and a labor force participation rate that declined 0.1 percentage point to 62.1%, its lowest level of the year. 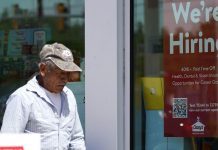 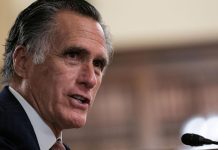 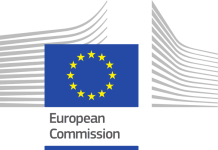 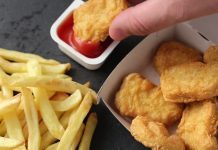 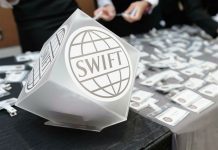 Ukraine Invasion: What Is SWIFT And What Would Banning Russia From Using It Do?