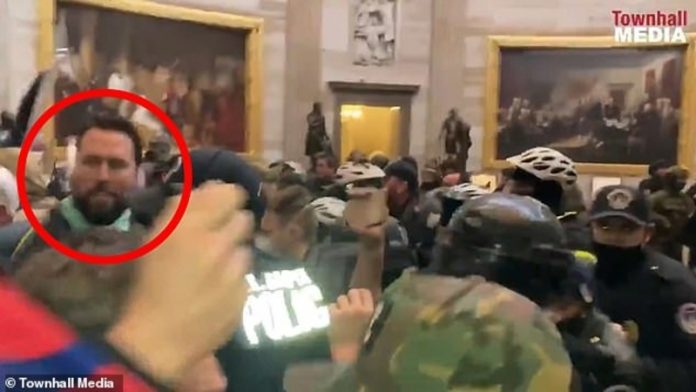 A US Olympic gold medalist swimmer who was spotted at the deadly Capitol riots last week has been charged with participating in the violent insurrection.

Klete Keller, who won two Olympic gold medals as a relay teammate of Michael Phelps, was charged in a federal court in D.C. on Wednesday, court records show.

The 38-year-old is accused of obstructing law enforcement, knowingly entering or remaining in a restricted building, and violent entry and disorderly conduct on Capitol grounds, according to a criminal complaint.

It comes after Keller, from Las Vegas, as well as a California doctor was spotted and identified among the angry mob of Trump supporters in footage of the Capitol siege posted online.

At least a dozen people within the sport identified the towering man wearing a US Olympic team jacket inside the building as Keller on Tuesday.

The video showed the 6ft 6in five-time Olympic medalist ambling about amid the crowd but not engaging in violent behavior.

In footage taken by Townhall reporter Julio Rosas, Keller is seen towering over the others tussling with riot police beneath the Capitol Rotunda, with his Team USA swimming jacket in clear view. 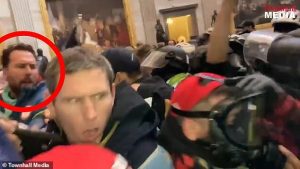 The US Olympic and Paralympic Committee addressed the controversy in a statement on Wednesday as it awaited confirmation from law enforcement.

‘First off, I strongly condemn the actions of the rioters at the U.S. Capitol. They do not represent the values of the United States of America or of Team USA,’ USOPC CEO Sarah Hirshland said.

‘At home, and around the world, Team USA athletes are held to a very high standard as they represent our country on the field of play and off. What happened in Washington, D.C., was a case where that standard was clearly not met.

‘The people involved attacked the very fabric of the democracy we all proudly represent and, in turn, also let our community down. I urge everyone associated with Team USA to continue to celebrate our diversity of background and beliefs, stand together against hatred and divisiveness, and use our influence to create positive change in our community,’ she added.

A woman who answered the phone for the Colorado and Ohio-based real estate agency where Keller works told Reuters: ‘We are not commenting on anything right now’, before hanging up.

Keller is a five-time Olympic medalist who held off Australian great Ian Thorpe on the anchor leg of the 4x200m freestyle relay at the 2004 Athens Games to win gold for the United States.

Keller struggled to adjust to post-Olympic life after 2008, according to the SwimSwam website.

He told the Olympic Channel podcast that swimming had set high expectations for his success, which made him ‘entitled’ in the workplace, and a poor worker.

‘I’ll be honest I wasn’t a good employee for the longest time because I expected it all to come to me as easily as swimming did,’ Keller said.

‘Once things started going south, I lost that enthusiasm.’

In 2014, he and his wife got divorced, after which he lived out of his car for about 10 months.

In an interview with USA Swimming, Keller explained that he did not have visitation rights to see his children for four years.

‘It’s a slow leadup of shirking responsibility, and just letting the little things slide every day.

‘It eventually builds a critical mass and once that critical mass is built it’s that last final straw that breaks the camel’s back,’ Keller told the Olympic Channel, according to SwimSwam.

He said his outlook on life was getting ‘lower and lower,’ but he was saved by his sister Kalyn Keller, 35, also a professional swimmer who represented the U.S. in the 2004 Olympics.

Keller worked through this time by teaching swim lessons and running swim clinics.

According to the New York Times, Keller has deleted his social media accounts, several of which the publication said had included a stream of pro-Trump messaging in recent years.