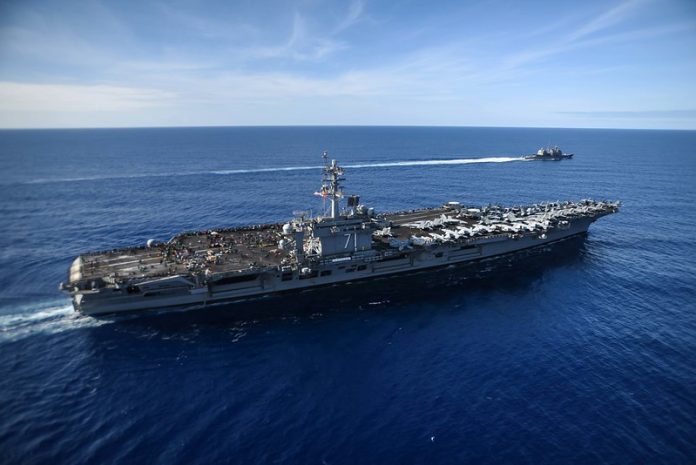 In a desperate call for help, U.S. Navy Capt. Brett Crozier wrote to senior Pentagon officials Monday to ask them to provide “compliant quarantine rooms” for more than 100 sailors infected with the novel coronavirus on the USS Theodore Roosevelt, the nuclear-powered aircraft carrier he commands. “This will require a political solution but it is the right thing to do,” the captain wrote in a letter obtained by the San Francisco Chronicle. “We are not at war. Sailors do not need to die. If we do not act now, we are failing to properly take care of our most trusted asset—our sailors.” Crozier’s letter is an extraordinary challenge to Defense Secretary Mark Esper’s approach to the coronavirus outbreak. Esper, during a month’s worth of briefings, has emphasized the need to maintain military readiness during the public-health emergency. Crozier, whose ship is a critical component of that global U.S. military readiness, is warning that unless the ship ceases its operations and attends to the immediate health needs of its sailors, lives will be lost.

“Keeping over 4,000 young men and women on board the TR is an unnecessary risk and breaks faith with those sailors entrusted to our care,” Crozier wrote. In effect, Crozier’s point is the military analogy to the warnings by epidemiologists against prematurely returning to work and social gatherings in the name of saving the economy. The aircraft carrier is docked in Guam.

Mass Shooting Barbara Sobel - June 12, 2021
0
Five years ago, 49 families learned their mothers, fathers, siblings, and friends would not be coming home after a gunman opened fire on the...

On The Fifth Anniversary Of The Pulse Nightclub Shooting Killing 49 People, Congress Voted...

Coronavirus Barbara Sobel - June 12, 2021
0
Researchers in China say they have uncovered a new batch of coronaviruses in bats that resembles the COVID-19 virus that has swept the globe. The...

On The Fifth Anniversary Of The Pulse Nightclub Shooting Killing 49...

Chinese Researchers State They Have Found A New Batch Of Covid...