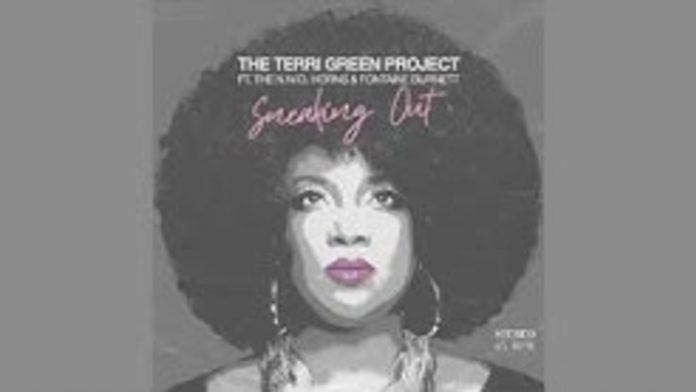 The new single, Sneaking Out, written and produced by Terri Green and Torsten “Toddi Reed” Abrolat, is a return to the good old days for the Hamburg-based duo, American singer, songwriter, and German-born producer, saxophonist, engineer.

Long-time engineer to the project, Jochen Jobrizz Mueller, based in Tasmania, Australia is the man behind the mix on this and most of Terri’s releases.

Terri was inspired by the music she feels is missing and still very much needed in the clubs and pubs of today.

Together Terri, Torsten along with fellow American guitarist, Fontaine Burnett, known for his work with Germany’s best-selling soul star Max Mutzke, turned a jam session into a musical dream fulfilled.

He knew just what was required when he got the call. Thomas was the man behind the bass for Terri’s #1 UK Soul hit, ‘Night To Remember.’

‘Remember’ and #1 Indie Soul Record ‘Never Gonna Let’ and the massive collaboration effort Terri put together with Toddi and Rob Hardt earlier this year, the cover of Marvin Gaye’s ‘What’s Going On.’

The infectious groove he placed on the top ten Uk Soul single ‘Giving It Up,’ was heard on global soul radio, helping land The Terri Green Project tracks in the stacks of soul loving grown, and sexy deejays everywhere.

The work of Wondel and Gilbert was the highlight during tours with Mr. Barry
White.

Their sharp punch and precision glide perfectly against Terri’s warm, yet direct tone signaling it’s time to get to the dance floor.

‘Sneaking Out,’ a two-part release, includes a cool, clever disco fused soulful house remix from Peter Brown (Madrid), who constantly tops both Beatport and Traxsource club charts at #1 and is Terri’s longtime collaborator.

Later in the summer, look for a pack from Frank Blythe (U.K), delivering a wicked 80s tinged smasher, reworking Terri’s vocal as only he could. His fantastic synthesizer solo is just brilliant.

Terri is also known as dance icon Terri B!, released dance records for over 25 years, with more than 20 Top 100 hits worldwide, #1 in Spain and Italy, and 3 Billboard Dance Song #1 hits. The slow transition to soul was only a homecoming for her.

She was always dreaming of working with names like the O’Jays, The Manhattans, Earth, Wind & Fire, The Brand New Heavies with a very diverse musical ear from her start back in 1997.

She has released music with names like Avicii, Roger Sanchez, Ralphi Rosario, and a ton of top dance artist as well. It was Terri’s voice and original song with Roger Sanchez, ‘Bang That Box,’ that brought Avicii to the mainstream, and he went on in his short life to
remix more music for her in his brief career.

She is forever grateful. Her voice set her up as one of the most sought-after voices in dance, landing even in the past year with top entries in the U.K Upfront top 30 at #6 and Commerical Pop top 30 at #5.