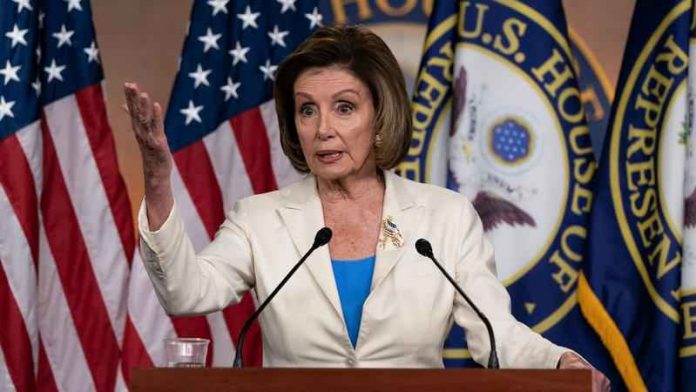 Tensions between the party leaders in the House rose to a boil on Wednesday when Speaker Nancy Pelosi (D-Calif.) called her Republican counterpart, House Minority Leader Kevin McCarthy (Calif.), a “moron” for his opposition to wearing masks in the House.

Brian Monahan, the Capitol physician, instituted a new mask mandate for the lower chamber late Tuesday night in response to a spike in infections from the delta variant of the coronavirus. The rise in cases also prompted the Centers for Disease Control and Prevention (CDC) earlier Tuesday to push new recommendations for masking indoors, even among those who’ve been vaccinated.

Monahan’s decision was hailed by Pelosi, who has leaned on his advice throughout the pandemic. But it met with skepticism from McCarthy, who blasted the new mandate as a Pelosi-imposed political ploy.

“Make no mistake — The threat of bringing masks back is not a decision based on science, but a decision conjured up by liberal government officials who want to continue to live in a perpetual pandemic state,” McCarthy tweeted Tuesday night.

“That’s the purview of the Capitol Physician … the mandate from him. I have nothing to say about that except we honor it,” Pelosi told reporters outside the Capitol.

Pelosi then ducked into her vehicle and was whisked away from a climate event outside the Capitol.