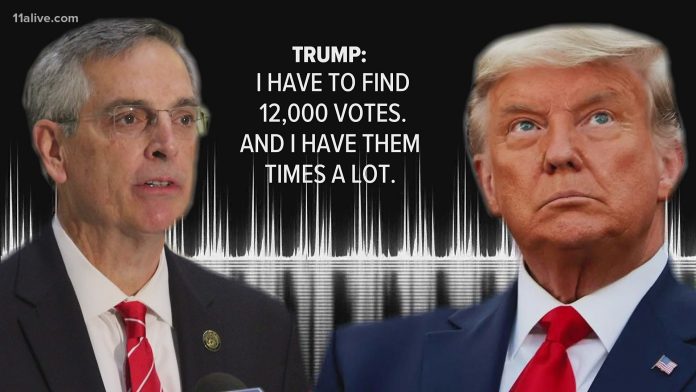 Donald Trump’s push for Georgia Secretary of State Brad Raffensperger to overturn the election results in his state prompted calls for his impeachment and FBI involvement, and it could put the president at the center of a criminal probe.

In a leaked phone call from over the weekend, Trump told Raffensperger he wants to “find” enough votes to secure a win in the state and that there was nothing “wrong” with the secretary of state telling people they “recalculated” vote tallies. Raffensperger, who pushed back against the president’s claims, won’t pursue a criminal investigation, but it’s possible Fulton County District Attorney Fani Willis will.

“I understand the Fulton County District Attorney wants to look at it. Maybe that’s the appropriate venue for it to go,” Raffensperger told ABC’s Good Morning America on Monday, January 4, 2021.

Raffensperger called it a possible “conflict of interest” for his office to spearhead an investigation since both he and the chief investigator spoke with Trump.

In a statement to WSB-TV, Willis said she found reports about Trump’s call with Raffensperger “disturbing.” The DA, who took office on Friday, reinforced a previous commitment to “enforce the law without fear or favor” and said once the secretary of state’s elections division completes an investigation, her office will handle the matter “based on the facts and the law.”

“Anyone who commits a felony violation of Georgia law in my jurisdiction will be held accountable,” Willis said.

News of the call prompted “ImpeachAgain” to trend on Twitter, and on Monday two House Democrats, Ted Lieu and Kathleen Rice asked FBI Director Christopher Wray to open a criminal probe. They said there was “ample factual predicate” for an investigation and that the evidence of Trump’s election fraud was now in “broad daylight.”

After winning Georgia in 2016, Trump lost the state in November by just 11,779 votes, a margin of about .2 percent. The president refused to concede the loss, often claiming that he was victorious if only “legal” votes were counted. It’s a message he conveyed during his call with Raffensperger, saying that people attempted to vote but couldn’t because a ballot in their name had already been cast and there were “300,000 fake ballots.”

Raffensperger, who voted for the president in November, wouldn’t weigh in on the legality of Trump’s request, telling Good Morning America, “I’m not a lawyer.” However, he said Georgia will “follow the law” and dismissed the appropriateness of the call.

“I never believed it was appropriate to speak to the president…but we took the call and we had a conversation,” Raffensperger said. “He did most of the talking. We did most of the listening but I did want to make my points that the data he has is just plain wrong.”

Among the incorrect data, the president threw at Raffensperger was that hundreds of people who were dead cast ballots in November. Raffensperger said his office found only two cases.

Democrats aren’t the only ones offering a negative view of Trump’s phone call. Senator Marsha Blackburn, one of the 12 Republican Senators who plan on objecting to the Electoral College results on Wednesday, told Fox News’ Fox & Friends that the call was “not a helpful call” and that states, not the federal government, are in charge of election integrity.

However, Trump still has support from Senator David Perdue, who faces a tough re-election bid in the Georgia runoff. The president is expected to visit Georgia on Monday in a final attempt to persuade voters to cast their ballot for Perdue and Senator Kelly Loeffler on Tuesday, and Perdue told Fox News something “untoward” happened in Georgia and “we have not gotten to the bottom of it.”

“I didn’t hear anything in that tape that the president hasn’t already said for weeks now since the November election calling for some sort of investigation, some sort of resolution to the improprieties and the irregularities that we now see happened in November here in Georgia,” Perdue said.