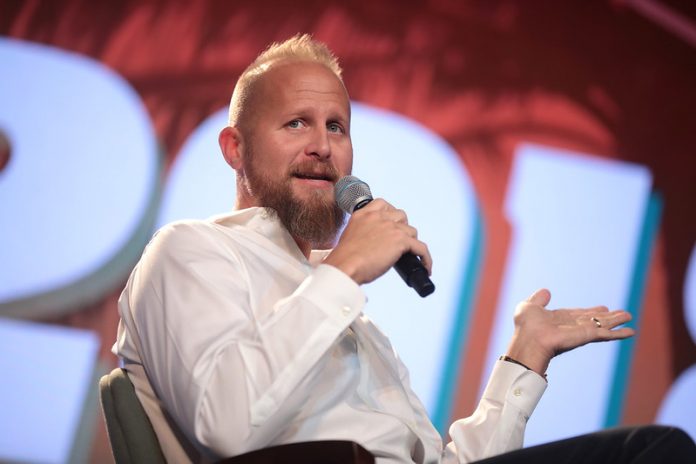 A police report is revealing disturbing details from Sunday’s incident at the home of former Trump campaign manager Brad Parscale. Parscale was involuntarily hospitalized under a Florida law allowing police to detain anyone deemed a threat to themselves or others.

“While speaking with Candace Parscale I noticed several large-sized contusions on both of her arms, her cheek, and forehead,” officer Steven Smith wrote in the police report, according to the Miami Herald. “When I asked how she received the bruising, Candace Parscale stated Brad Parscale hits her.”

The Herald adds that Parscale had “racked and loaded a handgun during an argument” with his wife.

“Parscale’s wife,” whose name is actually “Candice,” “told them her husband had not hit her Sunday but had smacked her phone out of her hand when she tried to call his father. She said she heard a gunshot from inside the house after ‘fleeing,’ but later said it might have been a car backfiring.”

Candice Parscale had called 911, telling police he “had guns and was threatening to harm himself, Fort Lauderdale police said Sunday night,” the Sun-Sentinel reported.

Police confiscated 10 guns from Parscale’s home, including rifles. Brad Parscale is listed as “Bradley” in the police report.

“Candace immediately fled [the] residence and stated she heard a loud bang shortly after,” the incident report continued, according to Local10.com, an ABC affiliate. “Candace stated that they realized that Bradley did not shoot himself when they heard Bradley ranting and pacing around the residence and the dog barking franticly. However, they were concerned that Bradley might still try to shoot himself, due to him being in possession of several firearms and refusing to vacate the residence.”

“[Parscale’s] speech was slurred as though he was under the influence of an alcoholic beverage and he seemed to be crying,” police officer Timothy Skaggs wrote in his report. “Due to his refusal [to] exit the residence on his own free will and his emotional state, crisis negotiators were requested.”

“Brad was drinking a beer and was clearly intoxicated,” officer Christopher Wilson, who is also a friend of Parscale wrote in the report.