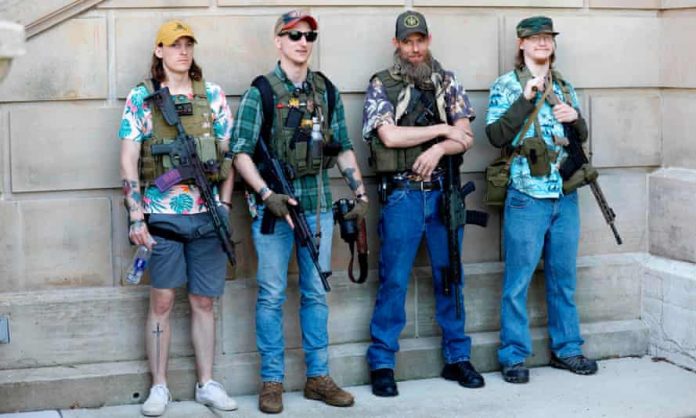 The FBI has warned local officials of potential violence from the “Boogaloo Boys” and other far-right groups at all 50 state capitols over the next week and a half.

“Armed protests are being planned at all 50 state capitols from 16 January through at least 20 January, and at the US Capitol from 17 January through 20 January,” one FBI bulletin reads, according to ABC News, which obtained a copy of the memo.

The bulletin reportedly goes on to tell authorities that one unnamed, armed group has “warned that if Congress attempts to remove POTUS via the 25th Amendment a huge uprising will occur.”

The memo comes just days after a riot at the U.S. Capitol, in which supporters of President Donald Trump stormed the building in an effort to stop the Electoral College certification of President-elect Joe Biden’s victory. While this effort was unsuccessful, five people died in the attack. One Capitol Police officer, Brian Sicknick, died after reportedly being assaulted with a fire extinguisher by rioters.

Another FBI memo obtained by Yahoo News states that some members of the Boogaloo movement planning Jan. 17 rallies “indicated willingness to commit violence in support of their ideology, created contingency plans in the event violence occurred at the events, and identified law enforcement security measures and possible countermeasures.”

The Dec. 29 report details threats of violence specifically at the Minnesota and Michigan state capitols—two states that President Trump instructed his supporters to “liberate” in April amid COVID-19 lockdowns on his since-deleted Twitter account.

According to that report, Boogaloo supporters in Minnesota “identified law enforcement sniper locations and considered breaking into federal buildings for use as firing locations, if fighting occurred.” Another follower considered attaching duct tape to his back to pose as law enforcement, the report read. “At least one follower expressed his willingness to die for the Boogaloo movement,” the memo reportedly states.

The Boogaloo is a far-right movement that’s called for a second civil war to overthrow the government. According to the Anti-Defamation League, their name comes from the 1984 movie Breakin’ 2: Electric Boogaloo.

In Michigan, Boogaloo members discussed “using a gasoline-based device with a tripwire” to “cause a distraction while other individuals ‘take’ the capitol” building, the report read.

In October, 13 men were arrested in relation to an alleged plot to kidnap Michigan Gov. Gretchen Whitmer. Some of the men arrested in connection with the plot were linked to a local far-right militia group, according to NBC News.

On Monday, the Detroit Free Press reported that Michigan’s state capitol commission voted to reverse the state’s policy allowing open-carry in the legislature, effective immediately. It is unclear if that vote was related to the FBI reports.