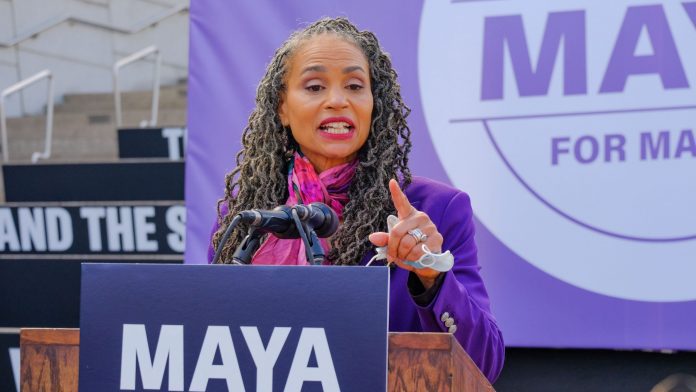 New York City mayoral candidate Maya Wiley has announced a coalition of Black women who are throwing their support to her potentially historic election.

The Maya Wiley for Mayor Campaign unveiled Black Women for Maya, a coalition of prominent and famous Black women in New York City and beyond who have been tapped to help lead and guide her groundbreaking candidacy.

“Black women are the cavalry in every crisis, the care-takers in every community, and the consistent protectors of our democracy. Black women are celebrated on election day and exploited at work every day. To be a Black woman today is to be called a queen and then told we aren’t qualified sometimes even in the same sentence,” Maya Wiley says in a press release provided to theGrio.

“In New York City, that ends on November 2, 2021, when Black women show this country that Kamala Harris is the first, but not the last to make history. I am running to be the next Mayor of New York City because I want every last Black woman and girl in this city to see themselves in the seat of power. I want them to know there is no longer a need to find a folding chair to drag to a table we weren’t invited to. I want every Black woman and girl to see themselves at the head of the table, where they deserve to be.”

Like many cities across the nation, New York City is facing great economic challenges during the coronavirus pandemic. The city’s seasonally adjusted unemployment rate was 11.4 percent in December, according to Department of Labor data, and is likely worse for Black and Brown communities.

Earlier this month, Wiley announced her New Deal New York plan to bring economic relief to the city, which specifically seeks to close the inequality gap. In a nutshell, her plan would invest $10 billion in infrastructure, stimulus relief, and a jobs program.

In a recent exclusive interview with theGrio, Maya Wiley, a civil rights lawyer and activist, said the issue of policing in the city and a myriad of issues facing communities of color — including the ongoing crisis of COVID-19 — compelled her to do something about it.

“I am running because I know that this is a city where we can all live with dignity if we have a city government that is transformative rather than transactional. We got to get off the treadmill of transaction. And as someone who spent 30 years as a civil rights lawyer, racial justice advocate outside and inside of city government, I know that it is possible,” Wiley told theGrio.

“And frankly, even before COVID, even before George Floyd, we were facing the challenges that COVID laid bare. I think of COVID as the thing that drew back the curtains once again on just why and how it is that when disaster strikes, it is communities of color that get hit first and hardest and that no one in the city is benefited by that.”