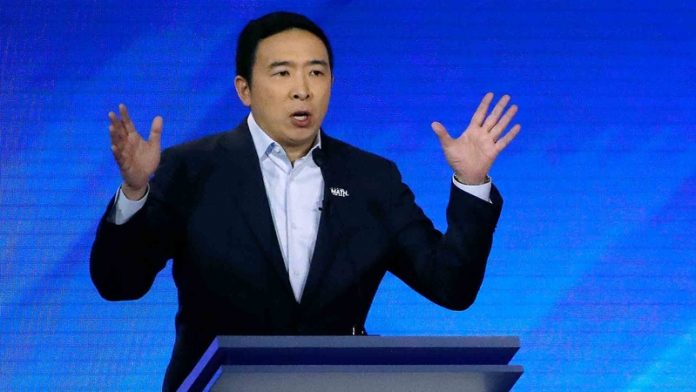 Andrew Yang, one of the leading candidates in the New York City mayoral race, was confronted during a campaign stop in the Bay Ridge neighborhood of Brooklyn on Saturday about his opposition to the Boycott, Divestment, and Sanctions movement.

In an OpEd for the Forward last month, Yang described the BDS movement as “rooted in antisemitic thought and history, hearkening back to fascist boycotts of Jewish businesses.”

As Yang toured Yemeni businesses in Bay Ridge, Malik Hassan, an advocate of Palestinian rights, approached the candidate and asked him to “clarify” his comments on BDS, according to a video published on Twitter by Politico reporter Joe Anuta.

“Saying that it is akin to fascist boycotts of Jewish businesses, that completely disappoints many Palestinian activists, many Arabs, and 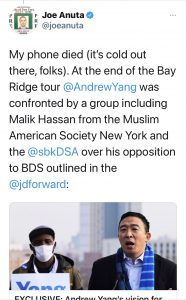 many Muslims,” said Hassan, a member of the Democratic Socialists of America who has defended the militant Hamas movement.

Yang, who seemed surprised by the confrontation, responded that he had “never made comments to that effect.”

Hassan referred specifically to Yang’s essay in the Forward, in which the candidate promised that, if elected mayor, his administration would “push back against the BDS movement, which singles out Israel for unfair economic punishment,” and said that “strong ties with Israel are essential for a global city such as ours.”

Yang then walked away. Anuta, the Politico reporter, wrote in that an activist had “stood in front of Yang’s car and prevented him from leaving. He was eventually shooed to the side.”

A majority of the leading mayoral candidates also told the Forward in a recent survey that they are opposed to BDS. At a mayoral forum last week hosted by New York Jewish Agenda, eight of the 10 participating candidates repeated their assertion that they oppose the boycott movement, though all 10 said they would also reject any efforts to criminalize participation in it.

Yang, a former Democratic presidential hopeful, has made outreach to New York Jews, especially the Orthodox, a priority of his campaign ahead of the June 22 mayoral primaries. He has personally reached out to several Orthodox leaders and took a strong stance against governmental intervention in examining the secular curriculums in private yeshivas, a hot-button issue.

Rep. Ritchie Torres, a Democrat from the Bronx who made his strong opposition to BDS a key issue during his recent run for Congress, serves as co-chair of the Yang campaign.

“Andrew Yang has been uniquely visible and vocal in condemning BDS, which singles out the world’s only Jewish state for delegitimation,” Torres said on Sunday. “Andrew is not looking to avoid controversy at all costs and be all things to all people. He has taken a stand on behalf of what is right.”

Torres, who advises the candidate on Israel, described Yang’s firm position on the matter as “leadership.”