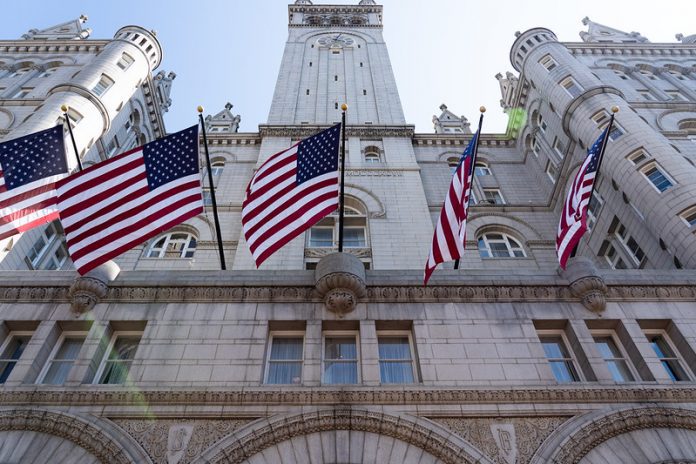 As President Donald Trump hints that he plans to deliver his nomination speech from the White House on Aug. 27, the hotel bearing his name down the street is making a power play of its own: spiking its room rates by more than 60 percent for those convention dates.

Listings for rooms at the Trump International Hotel in D.C., via Hotels.com, show rooms for one adult on the night of the address starting at $795 and running as high as $2,070.

That price tag represents a massive increase from the $495 starting rate currently offered for the dates one-week following and one week prior. For three days before Trump’s scheduled speech—which were originally scheduled to be the dates of the GOP convention in Charlotte, North Carolina—the hotel is charging $695 a night for its cheapest room. The hotel will begin charging $795 that Thursday, and continue through the weekend, before dropping back to $495 on Monday.

The price hikes come as other luxury hotels in D.C. are cutting their rates: accommodations at the Mandarin Oriental on August 27 beginning at $367, while a comparable room at the Fairmont Washington will run $263.

The price hikes at the Trump hotel were first spotted by Trump hotel sleuth Zach Everson. Since then, the costs have gone up.

The party summit was expected to provide a massive boost to local businesses in Charlotte, and then to those in Jacksonville, Florida, after the president relocated the gathering further south amid a squabble over health precautions with North Carolina Gov. Roy Cooper. Trump finally called off the official festivities in late July in favor of “telerallies,” due to the escalating COVID-19 pandemic.

Republican officials have reportedly considered hosting convention functions at the Trump hotel itself. And during an interview with Fox & Friends on Wednesday morning, Trump said he would “probably” hold his speech from the White House itself. Ethics experts have questioned the move as a potential violation of the Hatch Act which prohibits federal government employees from engaging in some forms of political activity. But Trump, later in the day, defended the idea of a White House convention speech by noting the president isn’t subject to the law.

“There is no Hatch Act because it doesn’t pertain to the president,” he said.

Should he formally decide to hold the speech at the White House, it would likely result in a wave of people—mainly party insiders and Trump supporters—coming to D.C. to be part of the festivities. Those people would need accommodations and hotels would stand to benefit. So would Trump. The president earned $40.5 million last year from the luxury lodgings inside the federally owned Old Post Office building.

“If it’s in D.C., and all these people are coming in to be around a big event for him, they will almost certainly be going to the Trump Hotel,” said Jordan Libowitz, communications director at the ethics watchdog Citizens for Responsibility and Ethics in Washington. “Every major Trumpworld figure will be there.”

Libowitz asserted that these latest price hikes reflect a strategy of overcharging and profiteering off the Trump campaign and presidency at the venue, which began with the president’s inauguration and continued through a 1300-percent spike observed the evening of a Trump Committee Retreat last winter. The hotel, located just blocks from the White House, has become a hangout for foreign officials and D.C. power players alike.

“I don’t think there’s any coincidence at all. This is a clear pattern for how the president makes money off the presidency,” said Libowitz, even as he acknowledged there was little legally actionable about the convention-week increases. “It’s one of those things; a lot of it is about optics and perceptions and ethical norms. This is not the sort of thing we would expect a president to do.”