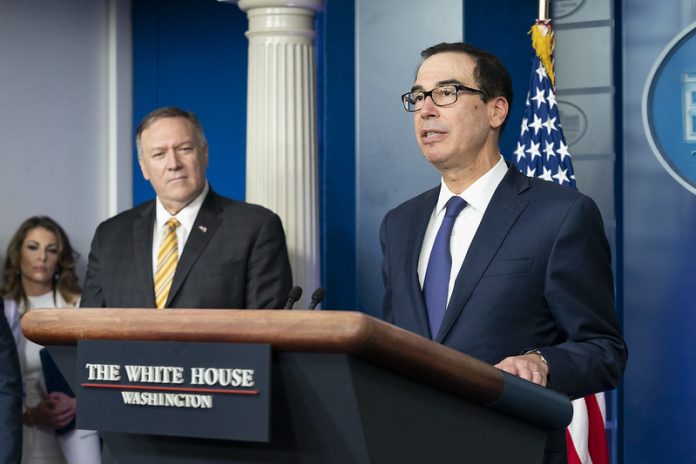 President Donald Trump’s Treasury Department has given U.S. banks a green light to seize a portion or all of the one-time $1,200 coronavirus relief payments meant to help Americans cope with financial hardship and instead use the money to pay off individuals’ outstanding debts—move consumer advocates decried as cruel and unacceptable.

“These payments are supposed to help individuals and families put food on the table during this crisis, not enrich debt collectors.”
Maura Healey, Massachusetts Attorney General stated.

In an audio recording from the webinar obtained exclusively by the Prospect, Ronda Kent, chief disbursing officer at the Treasury Department’s Bureau of the Fiscal Service, told bankers that “there’s nothing in the law that precludes” financial institutions from seizing a person’s payment and using it to pay off the individual’s debts.

“After a third of U.S. renters couldn’t make rent this month, the Treasury Department is pointing out opportunities for banks and debt collectors to steal Americans’ relief checks out from under them,” Jeremy Funk, spokesperson for consumer advocacy group Allied Progress, said in a statement responding to Kent’s comments.

“It’s the middle of a pandemic,” said Funk. “This money should be going toward food, rent, and medicine—it’s not the time to hand out favors to debt collection industry donors or pad some big bank’s bottom line,” said Funk. “Secretary Mnuchin needs to ensure that these $1,200 checks go straight into Americans pockets where they belong.”

Americans with direct deposit information on file with the Internal Revenue Service are expected to begin receiving the $1,200 payments in their bank accounts this week, provided that their banks do not opt to seize the money.

Those for whom the government does not have direct deposit information—a group that is disproportionately low-income—could be forced to wait up to five months to receive paper checks in the mail.

As Dayen explained, Congress explicitly exempted the one-time stimulus payments from collection under the CARES Act “if the debt is owed to federal or state agencies, unless the debt involves a child support payment.”

“But Congress did not extend this exemption to private debt collection,” Dayen wrote. “The payments are defined as tax credits and not federal benefits, making them subject to ‘garnishment,’ in which a debt collector that wins a judgment in court can seize anything of value held by the debtor.”

“Congress did give Treasury the authority under Section 2201(h) of the CARES Act to write rules exempting the payments from private debt collectors,” Dayen noted, but the Treasury Department—headed by former Goldman Sachs executive Steve Mnuchin—has thus far refused to exercise that authority despite pressure from Democratic members of Congress and state attorneys general.

On Monday, Massachusetts Attorney General Maura Healey issued guidance stating that the $1,200 payments “are exempt from seizure or garnishment by creditors under Massachusetts law.”

“These payments are supposed to help individuals and families put food on the table during this crisis, not enrich debt collectors,” Healey said in a statement. “With this guidance… my office is putting the debt collection industry on notice that these payments are off-limits.”

“During this public health and economic crisis, the states do not believe that the billions of dollars appropriated by Congress to help keep hard-working Americans afloat should be subject to garnishment,” the letter states.

Dayen noted that “legally speaking, banks have the right to ‘offset’ any deposits to pay off delinquent loans, overdraft fees, or other charges.”

“Banks have more immediate access to the coronavirus checks by virtue of having them deposited into accounts at their institutions,” Dayen wrote. “They’re also in front of the line for repayment of debts ahead of other private debt collectors.”

The possibility that banks could seize individuals’ relief payments as millions of people across the U.S. face layoffs, pay cuts, and reductions in work hours sparked outrage on social media.

“This is beyond predatory,” tweeted finance expert and investigative journalist Nomi Prins.