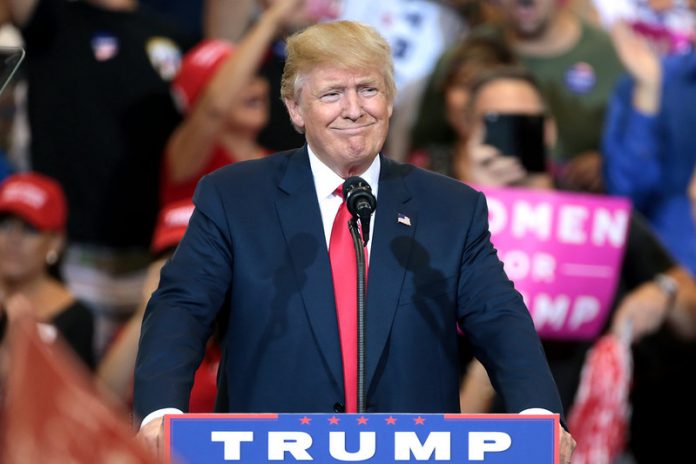 Donald Trump April 8, 2020, attacked voting by mail—a solution many rights advocates argue is particularly necessary amid the ongoing public health crisis—as a “terrible thing” even after admitting that he cast a mail-in ballot in the 2020 Republican presidential primary in Florida (presumably for himself) just last month.

“Mail-in voting is horrible. It’s corrupt,” Trump said during a Coronavirus Task Force press briefing. “Sure I can vote by mail… because I’m allowed to.”

“Well that’s called out-of-state,” Trump continued, attempting to justify what observers denounced as a glaringly hypocritical position. “You know why I voted? Because I happened to be in the White House and I won’t be able to go to Florida and vote.”

Trump added vaguely that “even the concept of early voting is not the greatest, because a lot of things happen.”

Sean Eldridge, founder and president of advocacy group Stand Up America, said in a statement late Monday that “Trump’s baseless attacks on vote-by-mail are a pathetic attempt to suppress the vote in the middle of a national crisis.”

“He is demanding that voters choose between protecting their health and participating in our democracy,” said Eldridige. “Expanding access to the ballot through mail-in voting should not be a partisan issue, yet Trump and his cronies are trafficking in debunked conspiracy theories to undermine efforts to ensure every eligible voter can cast their ballot this fall. Trump’s lies are especially dangerous after today’s catastrophic election in Wisconsin.”

Tuesday’s press briefing was not the first time Trump has attacked mail-in voting. Last month, as Common Dreams reported, Trump said in an interview on “Fox & Friends” last month that “you’d never have a Republican elected in this country again” if mail-in voting and other voting expansion proposals were to be implemented on a national scale.

Jhacova Williams and Kayla Blado of the Economic Policy Institute wrote in a blog post on Tuesday that Wisconsin’s elections “highlighted that Americans need more options to vote.”

“One promising method is a vote-by-mail system,” wrote Williams and Blado. “Five states—Colorado, Hawaii, Oregon, Washington, and Utah—already conduct their elections through mail… It’s time for state elections to practice what their own health departments preach: stay home.”

“Trump’s continuing efforts to rig the November election, in this case by suppressing the sacred right to vote, must be defeated,” Wertheimer said in a statement. “Every eligible voter must have a safe and secure opportunity to vote in November. In order to accomplish this, it is essential for Congress to provide the states with additional funding of at least $1.6 billion in the next relief bill, which is necessary to ensure that fair and honest elections occur in November, unrigged by President Trump and his allies.”