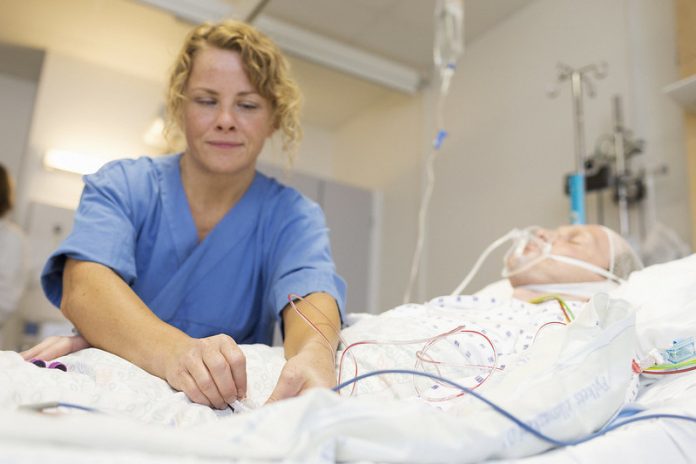 Olga Matievskaya and her fellow intensive care nurses at Newark Beth Israel Medical Center in New Jersey were so desperate for gowns and masks to protect themselves from the coronavirus that they turned to the online fundraising site GoFundMe to raise money.

The donations flowed in — more than $12,000 — and Matievskaya used some of them to buy about 500 masks, 4,000 shoe covers, and 150 jumpsuits. She and her colleagues at the hospital celebrated protecting themselves and their patients from the spread of the virus.

But rather than thanking the staff, hospital administrators on Saturday suspended Matievskaya for distributing “unauthorized” protective gear.

Across the country, front-line medical providers and hospital administrators are butting heads about precautions against the coronavirus pandemic. Clinicians are being told to reuse or go without necessary supplies even when treating patients infected with COVID-19. That goes against the way they’ve been trained. Some doctors and nurses now say they are being instructed not to speak to journalists and disciplined for doing so or taking action to protect themselves.

Matievskaya spoke to ProPublica last week about the fundraising campaign. She said she had been able to purchase most of what the nurses needed on eBay. She did not criticize her administrators, and after her suspension, she declined to comment. But four other Newark Beth Israel nurses spoke to ProPublica on the condition of anonymity about the dire shortage of gear.

All four said their administration has failed to provide the supplies they need to protect themselves and patients. Two of them work in the intensive care unit, which houses the sickest patients. The other two work in other areas of the hospital. They said Matievskaya showed leadership to keep people safe where their hospital administration has not. “There was no information distributed” about not being allowed to purchase supplies for others on staff, one of the nurses told ProPublica.

The hospital said it ensures clinicians have the supplies they need by following guidance from the U.S. Centers for Disease Control and Prevention for reusing gear. “We are working 24-hours a day, 7-days a week to ensure that the appropriate PPE gets to the right staff, at the right time,” the hospital said in its statement.

It did not answer questions about what would become of the supplies purchased through the campaign or whether other nurses who participated in the fundraising might be subject to discipline.

The confrontation at Newark Beth Israel may foretell what’s coming in other cities. Northern New Jersey, just outside New York City, is one of the nation’s hotspots, with more than 41,000 confirmed COVID-19 cases as of Monday. As of Thursday, the 665-bed hospital had housed 196 COVID-19 patients, according to an internal communication to hospital staff. Hospitals across the country have shortages of protective equipment, according to a report published Monday by the Office of Inspector General for the U.S. Department of Health and Human Services.

Aline Holmes, a clinical associate professor at the Rutgers School of Nursing, said she didn’t know the details of the case but was “very surprised” to hear of Matievskaya’s suspension. Hospital administrators are telling clinicians to reuse supplies, she said, which violates typical infection control standards. Suspending a nurse for obtaining protective equipment “doesn’t make any sense,” Holmes said.

“That just seems counterintuitive and really not a good message to send to your staff,” Holmes said. “The staff have a right to protect themselves. If the hospital can’t provide the necessary supplies, they have a right to do what they need to do. They’re caring for the sickest patients in the hospital right now.”

The situation is changing by the day as Newark Beth Israel acquires and runs through its supplies. But the four nurses told ProPublica that they have often not been given the N95 respirator masks the CDC has recommended to protect themselves from the virus. One of the ICU nurses said for at least one shift she received a regular surgical mask, which in her opinion is “like putting a paper towel over your face.”

Some nurses outside the intensive care unit have been given a single surgical mask in a brown paper bag that they’re expected to use for an entire week, one nurse said. Nurses at other hospitals around the country have made similar statements.

Some nurses in the intensive care unit have been caring for COVID-19 and non-COVID-19 patients on the same shift, the nurses said. So if they’re not properly protected, the nurses said, they could pick the infection up on their masks or clothing in one room and carry it to the other. The nurses said they have heard of hospital staff testing positive for COVID-19, but they don’t know where they picked it up and the facility’s administration doesn’t make any total numbers known. “We are spreading it, and we are getting it,” one of the nurses said of the coronavirus.

The nurses said the situation is especially desperate because the hospital performs organ transplant operations, and those patients have compromised immune systems. A ProPublica report about the quality problems in the heart transplant program last year led to action by regulators. The hospital made the corrections required by the federal and state regulators, it said in a statement. The FBI also investigated the hospital as a result of the story, but the agency declined to comment Monday.

The nurses said some of the non-COVID-19 patients are heart and lung transplant recipients.

“We understand this is what we signed up for,” one ICU nurse told ProPublica. “Just provide us with sufficient (protective equipment) so we can give these patients the optimal care that they need, and so we aren’t contaminating others or ourselves.”

In some cases, nurses and administrators have disagreed about what is needed to keep them safe. The intensive care nurses said they have asked for jumpsuits, the overalls that cover their entire outfit. But administrators have told them such equipment isn’t required, they said.

The intensive care nurses said they are directed to call a “command center” when they need more supplies. But when they reach out, “You get yelled at sometimes,” one of the nurses said.

The hospital did not respond when ProPublica asked for an explanation of the various conditions described by the nurses.

But Dr. Matthew Schreiber, the hospital’s chief operating officer, said in a brief phone conversation that the hospital has the personal protective equipment “that the staff require, which is at times not the same as the (protective equipment) that people want to have. There’s lots of items people may bring from somewhere else.”

Francis Giantomasi, an attorney who serves as the chairman of the hospital’s board of trustees, said the problem isn’t a lack of money. Newark Beth Israel had $186 million in net assets, according to its 2017 tax forms. It paid its chief executive officer Darrell Terry more than $1.4 million in salary and compensation, the documents show.

Gowns and masks and other critical gear “are in short supply everywhere and needed by everyone,” Giantomasi said. “That’s a serious, troubling, undeniable reality.”

One of the nurses said that if the hospital can afford to pay its CEO so well, then it should be able to go on eBay itself and purchase supplies for the staff.

In its statement the hospital blamed the problem on the way supplies are distributed. “No one person, institution, or hospital can independently correct this global supply shortage,” it said.

Chris Neuwirth, the assistant commissioner of the New Jersey Department of Health, said he feels that New Jersey is as prepared as it could have been. The 9/11 terrorist attacks, Superstorm Sandy and other events gave the emergency infrastructure a head start, he said. Meetings with hospital leaders began in early February. But the scope and magnitude of the coronavirus pandemic are beyond what emergency managers and public health officials could have anticipated, he said. When the crisis subsides, he predicted, there will be a reassessment of the stockpiles and what hospitals and health departments need to do in order to be prepared.

Holmes, the Rutgers professor, said hospital administrators need to step up and lead the providers on the front lines by communicating and building trust. If the staff members don’t trust the administration, they might refuse to risk their lives and the health of their families, she said. They might stay home, she said.

Medical providers will not forget how administrators treated them when the COVID-19 pandemic is over, said Dr. Zubin Damania, a Stanford-trained physician who is now a popular social media personality known as ZDoggMD.

Damania has more than 1.6 million Facebook followers and is pushing for clinicians to reform American health care. He said he is getting more than 250 private messages a week from doctors, nurses and other health care providers, lamenting the lack of protective equipment and unclear communication and intimidation they’re getting from their administrators.

In Mississippi, two doctors were reportedly fired for speaking out about coronavirus safety. A similar case was reported in Washington state.

“There’s so much distrust, and it’s all borne out of poor coordination of leadership that should know better,” Damania said.

ProPublica: A Nurse Bought Protective Supplies for Her Colleagues Using GoFundMe And The Hospital Suspended Her.

Raw Story: A nurse bought protective supplies for her colleagues using GoFundMe — then the hospital suspended her