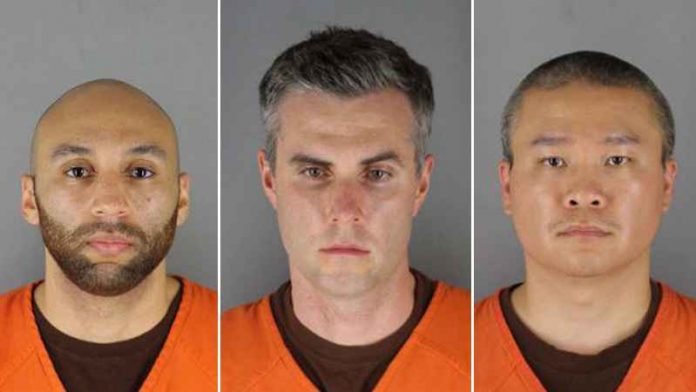 Lawyers for three of the Minneapolis cops charged for the death of George Floyd have filed motions to dismiss their cases, claiming leaked plea-deal negotiations with Derek Chauvin will ‘taint’ the jury pool.

The former cops are scheduled to stand trial on August 23, separately from the 44-year-old Chauvin – who was charged with second-degree murder and manslaughter after he was caught on video kneeling on Floyd’s neck.

The terms of the deal were not known until the Times story.

Now, the three former cops’ lawyers argue that Minnesota’s attorney general either ‘directly or indirectly’ leaked the details of the plea agreement to the outlet – thereby making a fair trial for their clients impossible when it comes to picking a jury.

Thao’s attorney Robert Paule filed a motion in Hennepin County District Court on Tuesday that was obtained by the Twin Cities Pioneer Press.

Paule argued the information about Chauvin’s now-canceled plea deal could ‘irreversibly taint the jury pool’ and would deny Thao ‘his constitutional right to a fair trial by impartial jurors,’ according to the motion.

Under the terms of the deal, Chauvin would have faced more than 10 years in prison to avoid a conviction on federal civil rights charges, the Times reported.

On June 10, Hennepin County Attorney Mike Freeman said negotiations with Chauvin had been underway but fell apart, ABC News reported at the time.

Minneapolis leaders announced on Wednesday they are bolstering security measures in the city, including bringing thousands of National Guardsmen and additional police officers for Chauvin’s March 8 trial.

Meanwhile, Kueng’s attorney, Thomas Plunkett, filed a second motion on Tuesday also seeking for the case to be dismissed and calling for sanctions against AG Ellison, Frank, and Katyal, the prosecutors.

Plunkett accused them of ‘prosecutorial misconduct’ and trying to ‘cheat’ the defendants from due process by allegedly mishandling how prosecutors shared evidence with defense attorneys.

‘Leaking prejudicial information mere days before the trial is loathsome and underhanded. The State’s conduct has been pervasive, malicious and an affront to the dignity of the Office of the Attorney General,’ the motion reads.

The state’s attorney general, Ellison, defended his office’s handling of the case, saying in a statement: ‘It’s sad that the defense would stoop to peddling baseless conspiracy theories rather than prepare a serious defense of their client to address the grave crimes with which he is charged.’

‘Unlike the defense, we are confident in our case and look forward to presenting it to a jury,’ he wrote.

Nelson, however, has not yet weighed in on the leak of the reported plea deal.

Lane’s attorney Earl Gray filed a motion Wednesday asking to join on to the motions filed by lawyers for Thao and Kueng, the outlet reported.

During the encounter with Floyd, Lane allegedly held Floyd’s legs while Kueng was positioned on his back and Thao held off angry bystanders who witnessed Floyd’s death, prosecutors said.

The city has already started installing a security perimeter around the Hennepin County Government Center, City Hall, and nearby buildings.