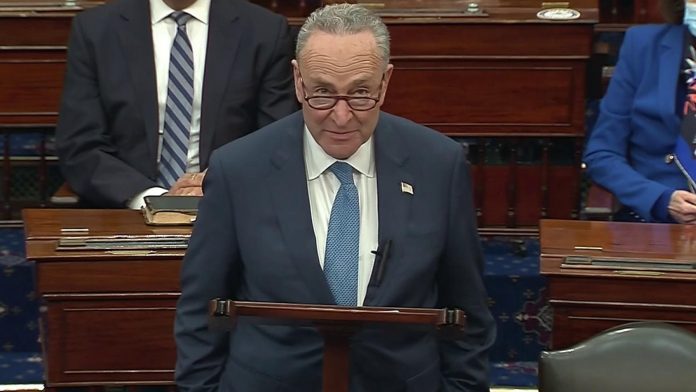 Senate Majority Leader Chuck Schumer said that the House’s article of impeachment will be delivered to the Senate on Monday, triggering the start of the Senate’s impeachment trial of former President Donald Trump.

“I have spoken to Speaker Pelosi who informed me that the articles will be delivered to the Senate on Monday,” Schumer said on the Senate floor.

The House’s transmission of the impeachment article on Monday would mean that the Senate trial would begin at 1 p.m. ET on Tuesday — unless the Senate reaches an agreement that would push back the trial itself.

Senate Minority Leader Mitch McConnell had proposed delaying the trial until mid-February in order to give Trump’s legal team time to prepare, beginning the ceremonial functions next week but allowing two weeks for pre-trial briefs to be filed by the House and Trump’s lawyers. Schumer’s announcement puts a new deadline for the Senate leaders to reach an agreement — as the impeachment logistics are part of a broader negotiation over the Senate’s power-sharing agreement that remains stalled over a fight about the filibuster.

Schumer said Friday that McConnell’s insistence the Senate’s organizing resolution includes a provision protecting the filibuster was “unacceptable — and it won’t be accepted.”

The Democratic leader also pushed back on an argument from Senate Republicans that an impeachment trial for a former president was unconstitutional, noting legal scholars have said there is precedent for doing so.

“The Senate will conduct a trial of the impeachment of Donald Trump,” Schumer said. “It will be a full trial. It will be a fair trial.

But make no mistake, there will be a trial, and when that trial ends, senators will have to decide if they believe Donald John Trump incited the insurrection against the United States.”

McConnell said Friday that the Senate should give Trump a “full and fair process” to mount his impeachment defense.

“This impeachment began with an unprecedentedly fast and minimal process over in the House. The sequel cannot be an insufficient senate process that denies former President Trump his due process or damages the Senate or the presidency itself,” McConnell said. “Senate

Republicans strongly believe we need a full and fair process where the former president can mount a defense and the Senate can properly consider the factual, legal, and constitutional questions at stake.”