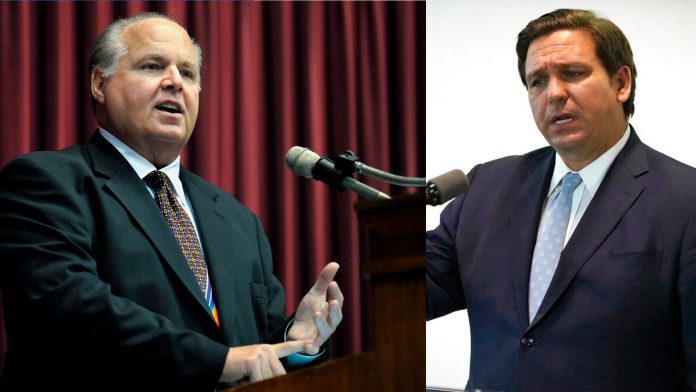 The lowering will happen when funeral arrangements are announced, which DeSantis spokesperson Meredith Beatrice confirmed was protocol.

For those tracking the Governor’s messaging in the two days since the conservative talk show host died of lung cancer on Ash Wednesday, the lowering of the flag represents tribute, recognition, and respect for the man regarded by many as the standard-bearer of American mainstream conservatism.

DeSantis, in an appearance on “Fox and Friends” Thursday, February 18, 2021, credited the just-deceased radio talk titan with helping him reach voters and ultimately win the Governor’s race.

“He had me on when I was running for Governor,” DeSantis said. “I was getting the tar kicked out of me every day and he had me on the week before the election in 2018. He didn’t have a lot of guests. I was honored to be on his show a couple of times.”

Hours before, DeSantis showed up on the Laura Ingraham show Wednesday night, describing Limbaugh as “the Babe Ruth of radio” and offering a unique insight into the more performative nature of the craft of the conservative commentator.

“He would have been great in radio even without the conservative thing. He’s just that talented. Obviously, he was a conservative icon up there with (Antonin) Scalia, (Ronald) Reagan, and (William F.) Buckley,” DeSantis said, invoking the conservative trinity of the former Supreme Court Justice, the Republican President of the 1980s, and the father of the postwar movement.

Describing Limbaugh as a “personal friend” and a “warm and decent man,” DeSantis said that he was “proud that [Limbaugh] was in the Southern Command down in Florida for so long.”

Announcing the lowering of the flags came at an event flush with enthusiastic partisans. DeSantis clearly timed it to please a stacked crowd, showing that while Limbaugh may have passed on, his legacy is alive and well and in the Governor’s Mansion.

“DeSantis is lowering Florida’s flags to half–staff for Rush Limbaugh. But he had no words for Congressman John Lewis. Priorities,” tweeted Agriculture Commissioner Nikki Fried Friday.