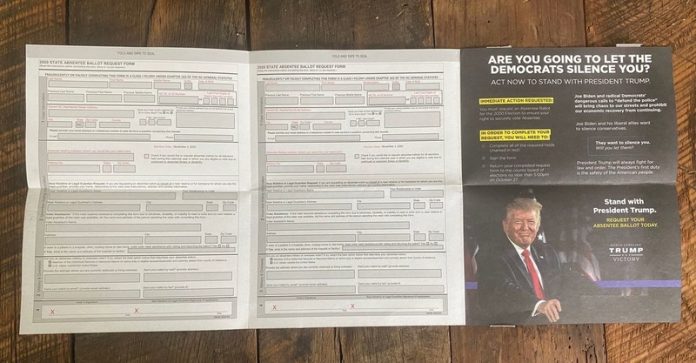 “ARE YOU GOING TO LET THE DEMOCRATS SILENCE YOU?” the mailer, sent by North Carolina Trump Victory, the joint field operation of Trump’s re-election team and the Republican National Committee, asks in large block font. “ACT NOW TO STAND WITH PRESIDENT TRUMP.”

The brochure goes on to request “immediate action” to “ensure your right to securely vote Absentee.” Next to a picture of a smiling Trump, the mailer says: “Stand with President Trump. Request your absentee ballot today.”

The president and a number of his Republican allies have routinely pushed the falsehood that voting by mail invites rampant fraud, even though he has voted by mail a number of times. CNN’s Ana Cabrera reported last Wednesday that the Palm Beach County elections board had delivered Trump and first lady Melania Trump mail-in ballots to Mar-a-Lago. Trump vowed in an on-air interview the next day that he would block crucial U.S. Postal Service (USPS) funding, citing concerns about universal mail-in voting.

“They need that money in order to have the Post Office work, so it can take all of these millions of ballots,” he told Fox Business host Maria Bartiromo on Thursday. “If they don’t get those two items, that means you can’t have universal mail-in voting. Because they’re not equipped.”

House Democrats have pushed for $25 billion in aid to the beleaguered agency and $3.5 billion in supplemental election funding as part of the next phase of coronavirus relief, but Senate Republicans have pushed back against the emergency funds.

On April 24, Trump called for the USPS to raise its prices. This summer, USPS officials reportedly floated a proposal to nearly triple the price of first-class mail — the class voters already pay to mail their ballots. In a statement provided to Salon, a USPS spokesperson called the notion “frivolous.”

“There are currently no pending changes to the rates and classes of mail impacting ballots,” the spokesperson said.

The coronavirus pandemic has boosted the popularity of voting by mail, along with turnout, but Trump has publicly sowed doubt about the practice by claiming it is rife with fraud and abuse, claims which are not substantiated.

Chandler Carranza, of Gaston County, North Carolina, told CNN that was the reason he laughed when he received the campaign mailer last Thursday.

“The irony is very thick and definitely not lost on me,” Carranza said. “Trump has been saying mail-in ballots will bring fraud to the election, but absentee ballots are legit. Which is it? It can’t be both ways. I laughed because if the campaign actually took information from other times they have reached out to me, they’d know I won’t vote for Trump despite being a registered Republican.”

White House press secretary Kayleigh McEnany, who previously voted by mail 11 times in Florida, argued in May that Trump and she were both voting “absentee” — and technically not “by mail.”

At the time, McEnany told The New York Times in a statement that “absentee voting has the word absent in it for a reason. It means you’re absent from the jurisdiction or unable to vote in person.”

However, The Times pointed out that Florida does not distinguish absentee voting from mail-in voting. Any registered voter can cast a mail-in ballot without providing a reason. Around that time, an extensive voter fraud investigation in Florida ended with zero prosecutions.

The USPS delivered the Trumps’ ballots to Mar-a-Lago, where the president declared residency last November in what may be a violation of federal election law.

Trump, who views Florida as a critical swing state, cited “tax purposes” as the primary reason why he had changed his residence from New York. He cast a mail-in ballot during Florida’s presidential primary in March, even though he reportedly drove by a polling place in person at least six times that month.

Still, the president has spent months pushing baseless claims about mail-in ballots being ideal vehicles for election fraud. Over the last 20 years, about 143 voting by mail fraud cases — out of 1,200 cases overall — ended with criminal convictions, according to an MIT analysis of the conservative Heritage Foundation’s database of election fraud in the U.S. That averages out to about seven or eight cases a year nationally, or about 0.00006% of the total number of votes cast.

The president, however, makes one exception: his newly declared Republican-led home state, whose systems he claimed in an early August tweet was somehow uniquely “safe and secure.”

“Whether you call it Vote by Mail or Absentee Voting, in Florida the election system is Safe and Secure, Tried and True. Florida’s Voting system has been cleaned up (we defeated Democrats attempts at change), so in Florida, I encourage all to request a Ballot & Vote by Mail! #MAGA,” the president recently tweeted.

Florida is represented by a governor and two U.S. senators from Trump’s Republican Party.

North Carolina’s GOP Sen. Thom Tillis, whose 2020 re-election bid appears increasingly underwater, has along with his affiliated committees taken a combined $48,500 from Postmaster General DeJoy and his wife, who are fellow state residents.

Tillis, one of the chief early architects behind North Carolina’s controversial voter ID law — dubbed the “monster” law by critics — played a central role in what a federal judge called the state’s “sordid history” of voter suppression when she struck down a North Carolina voter ID law late last year.

After news of the USPS warnings of potential voter disenfranchisement broke last weekend, the Tillis campaign told the Raleigh News & Observer that “Senator Tillis is confident in North Carolina’s strong absentee ballot program, is encouraging North Carolinians to vote absentee and believes we will have a fair election.”