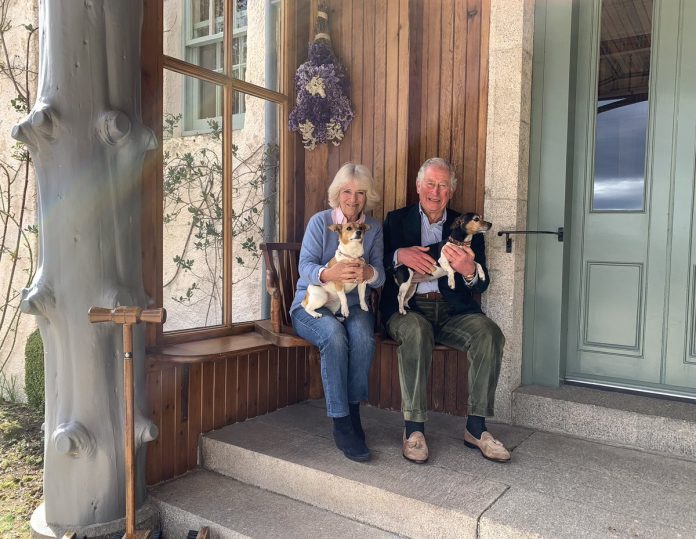 Prince Charles and Camilla, Duchess of Cornwall, are celebrating a huge milestone in their marriage, albeit under drastically different circumstances than previous markers.

On Wednesday, April 8, 2020, the royal couple, who recently endured a 14-day separation following Charles’ contraction of the novel coronavirus that forced the pair into self-isolation, shared a photo from their Birkhall home in Scotland celebrating their marriage of 15 years.

“Ahead of The Prince of Wales and The Duchess of Cornwall’s 15th wedding anniversary tomorrow, we are sharing this photo of Their Royal Highnesses with The Duchess’s dogs Bluebell and Beth,” a member of their staff shared in the photo posted on Twitter. “The photo was taken earlier today at Birkhall.”

In the photo, the pair sit shoulder-to-shoulder on a built-in loveseat affixed on the patio of their Scotland residence while holding their regal pooches on their laps.

Camilla kept her look easy in a light blue cardigan over a pink collared shirt, blue jeans and black boots as Charles donned black blazer over a collared shirt, olive green corduroy pants and beige penny loafers – the only constant from the two being the huge smiles on their faces as they take in their special day amid the global pandemic.

According to People magazine, both of Camilla’s Jack Russell terriers are rescue hounds from Battersea Dogs Home.

The Duchess of Cornwall, 72, returned to her royal duties this week after Charles, 71, spent seven days in isolation when he tested positive for COVID-19 last month and per local government guidelines, Camilla also had to self-quarantine despite testing negative for the illness as a precaution to others who she could potentially contaminate, according to Entertainment Tonight.

The couple first met sometime in the ‘70s. Sources have claimed the pair were either introduced through a mutual friend at a party or that they first met at a polo match, The Telegraph previously reported. And while Charles allegedly fell head over heels, he wasn’t ready to give up bachelorhood.

Camilla moved on and married cavalry officer Andrew Parker Bowles in 1973, only to part ways in 1995. The former couple share two children, Tom and Laura.

Charles married Princess Diana in a televised wedding that attracted about 750 million viewers worldwide in 1981. They welcomed Prince William in 1982 and then Prince Harry in 1984.

However, Diana had long suspected Charles kept an ongoing affair with his ex-girlfriend. Diana and Charles would ultimately call it quits after their marital woes became public and their divorce was finalized in 1996. Diana died a year later at age 36 after a car crash in Paris. Charles married Camilla in 2005.

The ceremony — at the town hall in Windsor just outside the gates of Windsor Castle — was followed by a blessing at St. George’s Chapel as well as a reception for 800 guests hosted by Charles’ mother Queen Elizabeth II at the castle.